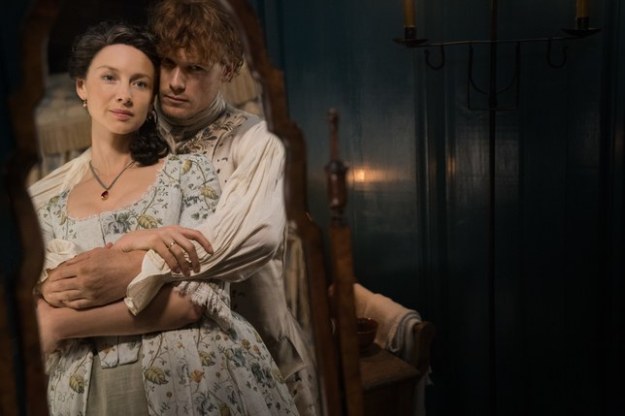 When last we saw Jamie (Sam Heughan) and Claire (Caitriona Balfe), they were wrecked on a beach after a hurricane. Their landing in America a bedraggled mess. However, they were alive. They had survived.

In the season 4 premiere of America the Beautiful opener we are shown two circles, a Neolithic stone circle with natives attending and dancing in it, and then a hangman’s noose.

We come across our heroes a month after the shipwreck, entering North Carolina to sort through what to do next. Ian (John Bell), Marsali (Lauren Lyle) , Fergus (Cesar Domboy), and Lesley (Keith Fleming) survived the shipwreck. One other survived the wreck, however Gavin Hayes (James Allenby-Kirk) managed to get himself arrested and is heading for the gallows. The episode is a shaky, a bad beginning for arrival in the Americas. It is not all roses for many who come to her shores. The Frasers and their extended family are about to find out how bad. America has great beauty in her forests and streams, but some of the people can be quite ugly.

There is loss this season, and we start out with losing another set of friends. Hayes’s hanging leaves poor Lesley bereft of his friend. After the hanging when the Frasers are gathered to sort through what has happened and how to bury their friend, Leslie brings up that there has been no proper lament. In Scotland, a lament is called a Cumhadh or Coronach. It is an elegy composed for a friend or celebrated person. The table breaks into a lament, lead by Lesley. They then agree to bury Hayes under the cover of darkness in hallowed ground.

While setting to bury Hayes’s body, Ian and Jamie have a conversation about what happened to Young Ian in Jamaica at the hands of The Bakra, Geillis Duncan(Lotte Verbeek). Ian tells quite passionately his fears after she made him do despicable things. Jamie consoles him and tells him there is a difference in the physical act of pleasure being forced upon him, and true feeling. When they are going to get the body, they find they have an unwelcome guest, Stephen Bonnet (Ed Speleers) in the wagon. Bonnet was due to be hung with Hayes but had escaped. Then went  about ingratiating himself on the Frasers party, even talking them into helping a friend of their late friend get away from the checkpoints set up to catch him.

Claire and Jamie end up spending the night in the woods to not catch suspicion. And that usually means an intimate moment before returning to the others. A deep conversation about what they truly mean to each other ensues. Jamie says to Claire, “After I die, my soul will still be yours. Nothing is lost, Sassenach, only changed.” This statement reminds us quite well a mystery from the first season. Many non book readers kept asking who the spirit was of the Highlander that Frank caught looking up at Claire in Inverness. It was Jamies ghost. You may wonder how that spirit could travel in time when we know that Jamie is not a time traveller. This statement of love is a strong bond. Jamie will always look out for Claire.

The Frasers find they must sell one of the rubies they took from Geillis, they need funding to feed and clothe everyone. Jamie does not wish to appear shabby in front of his Aunt Jocasta Cameron (Marie Kennedy Doyle). Claire wears the ruby set to attract the attention of a buyer. All goes well in selling the piece, and then Governor Tryon (Tim Downie) makes Jamie and offer of land in exchange for loyalty to the Crown, and to help keep an eye on the back country. Claire and Jamie discuss this new possibility, of staying in America, and what does it mean to have this land and gather settlers. He would be expected to stop any rising in the back  country.

The Frasers decide to stay in America, but have not decided on taking the offer of the Governor just yet. They make plans for taking a barge up the river to Aunt Jocasta’s plantation, River Run. Just when things seem so idyllic, disaster comes in the form of Stephen Bonnet and his river pirates. A massive struggle is joined and Claire is in the process of defending herself and Lesley comes to her aid, only to be killed and Bonnet attacks Claire and tries to take her two wedding rings from her, the gold ring from Frank, and the pewter ring from Jaimie. In the struggle Claire swallows the rings,  however Bonnet manhandles her and regains the ring that Jamie gave her. He takes the ring and leaves. This is a departure from the book, Drums of Autumn, where the ring that was taken was Frank’s ring that had engraving on it. This became very important in the storyline later. I’m very curious to see why they changed this detail, as the pewter ring would not really fetch a price. Of course Bonnet also had all of their gemstones as well.

Catch the next episode, 402 Do No Harm on November 11, 8pm EST, and on the Starz® App at Midnight. UK and Ireland viewers on Amazon UK Monday November 12.