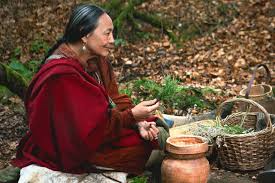 episode that harkens back to some season one and two drama, turmoil, strife, danger and that warm glowing feeling. After a season of bumpy starts and some very rapid fire storytelling, we get a very meaty episode with the dark realities of the colony of North Carolina, how hard it will really be to tame such wilderness, and all the human ugliness that can be told. While episode 402 Do No Harm was a shocker, Savages gets into the real meat of the dangers of colonial life. Even if the Frasers have been lucky enough to find a Scottish community for a backbone, and as they find in this episode, that doesn’t always suit. This episode was fantastic on many levels, and mainly because the backbone of the savages theme was that in reality, those that think they are civilized are not far removed from being a savage by more than a hairs breath, if that. This episode had the balance of action and extreme situations, along with the heartfelt homecoming of relationships rekindled. If you haven’t watched the episode, as always, spoilers alert.

In this episode, we have a short interlude with the Roger and Brianna storyline. Roger wearily and doggedly returns to Inverness and makes a visit to Mrs. Baird’s B&B, looking for Brianna. Miss Baird tells him that she left a few days back, and when he asks if she left anything, after telling him no, changes her mind and produces a very short letter to him. The instructions had been to mail it to him a year after she left.

Roger reads the letter with dread, and yes Brianna does still care for him, but she must leave to warn her mother about the fire and try to change history. Of course none of these characters has learned about changing history, that it often cannot be done, and there can be dire consequences if a timeline is broken. Brianna is a stubborn one. However with ten years time before the burning of the house on the ridge, perhaps she can warn her mother and they can make preparations. Roger is already heartbroken and the full impact of what has happened hits him. Not only has he lost her, in his own country, but now she is 200 years in the past. And how far behind her is he?

Claire’s growing friendship with the healer and Shaman Adawehi (Tantoo Cardinal) becomes more evident as we open in the 18th c. timeframe with the two women sharing an intimate creekside moment. The foreshadowing of the scene alone is sublime. Water is life. And there is sharing. The wise woman teaches Claire about local plants and herbs for healing, and begins to share the Cherokee language with Claire. Finally Claire has met a mentor, someone she can truly learn from. She asks Claire if she has children. Claire shares her love for Brianna.

Claire later prepares to leave to help a German family, The Mullers, the daughter about 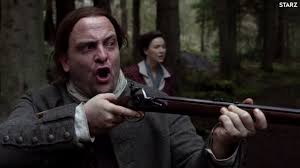 to deliver a child. The child comes and everything is a success, and they even name the baby for Clara, the German Claire. Things seem well and we see a proud German father, Gerhard, who shares all his hopes and concerns for family with Claire. Then there is an incident at the creek, where the Cherokee tribe come to water their horses. In a misunderstanding, Gerhard (Urs Rechn) insists on thinking that  the Indians steal the water and threatens to shoot them. The proud Tawodi (Will Strongheart) states that the water belongs to no one, it is for all to share. A standoff ensues and Claire places herself between a bunch of angry men. She somewhat successfully talks both sides down, 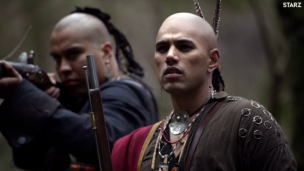 however the superstitious Gerhard takes the blessings of Tawodi for the creek water as a curse. Claire again has to talk the German back down. The incident bodes ill of the representation of the water and water rights ideals of the white settlers and the cultural beliefs of the native people and foreshadows what will become an ongoing problem between the newcomers and the tribal concerns in the colonies.

Jamie and Ian make for the Scottish settlement, Willem Creek, to look for settlers for Fraser’s Ridge, with high hopes that anyone would be glad of a 100 acres land granted, that would not be taxed until the land became fertile and able to support itself as a farm. Good intentions do not always go well in the colonies as the men head to a local town to recruit from the Scottish settlers and townsfolk. After an unsuccessful meeting or two, Jamie tries the brother in arms approach, one English prisoner to another with a man called Brian. He is informed of the over taxation in the name of the Governor Tryon and the corrupt sheriffs that have driven the men to quit their farms. They are loath to start again, and have their hard work and toil lost to the sheriffs. 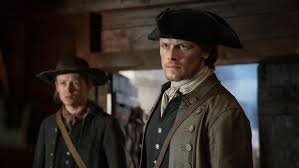 Finally Jamie and Ian give up, and when they are about to leave, our every calamitous Young Ian, has a bridle bit break. Jamie sends him to the blacksmith, and behold we here a favorite voice from the past as we get the back view of a man at the forge. Murtagh Fitzgibbons Fraser turns from the forge and greets Young Ian who is begging for help. Ian of course has no clue who is standing before him, and begins haggling with a man who will never back down at a price for a service. Ian leaves the smithy and meets up with Jamie, his bargaining talents smashed. Jamie is enraged that all their money 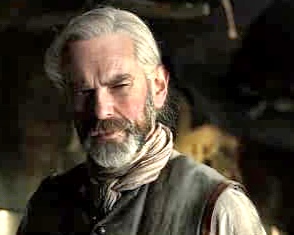 has been spent to fix a bit, and storms back to confront the smithy. In a scene that recalls the Print Shop Scene in season 3, where Claire and Jamie reunite in intensity, Murtagh with his back turned again hears Jamies demands and the voice hits him like a chord of notes. The emotion that rolls on the man is amazing, and Duncan Lacroix knows how to tug the pathos cord. He turns and looks at Jamie, thanks God, and Jamie takes a few moments to realize with the ever whitening hair and subtle age changes in face and countenance, that his lost Godfather is standing before him. As Ian says, the Old Coot. Bad choice of words, lad. Sam Heughan counters with emotional rolling of his own. The men rejoice and serious man hugs commence. Jamie introduces Murtagh and Ian is excited as he has heard about all the adventures the two men have shared in the past. 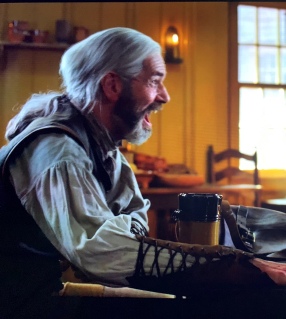 The men share a pint or two at the public house and Murtagh tells his story of indentured years and being apprenticed to the blacksmith. Jamie tells a very over joyous Murtagh that Claire came back to him after 20 years and is still in disbelief about it, and that he has a daughter.

Murtagh refuses and invitation to come to Fraser’s Ridge, and is annoyed with Jamie over taking the land grant from Tryon. He invites them to a meeting that night and says all will be made clear. At the meeting, Murtagh reveals himself to be a Regulator, the very men that Governor had warned about, and admitted his sheriffs may have been taking advantage of the people. Where else would Murtagh be, if not in the thick political rebellion. Jamie is about to get an earful of the other side of the story. Murtagh gives a speech, filled with pointed sarcasm, another thing Lacroix can sink his teeth in. He places a choice before Jamie. Murtagh has had enough of being treated unfairly by the British. He will pay what is due, not a penny more or less.  Murtagh makes a key statement about the backbone of the future problems which give rise to rebellion in the colonies, the ten years leading up to the American Revolutionary War. All anyone wants is 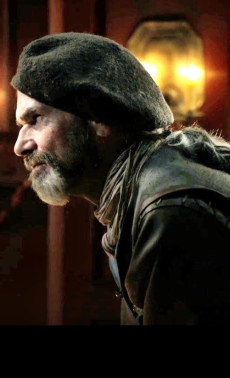 fair representation. Again, Jamie refuses to stay with Murtagh and join with him. He has a wife and Young Ian to consider. Jamie states he will not join, nor will he hinder their cause. After the meeting, he and Young Ian (John Bell) return to Frasers Ridge without Murtagh.

Claire spends the days after the birthing of the Muller’s grand daughter working the farm and of course pinning for Jamie. Rollo has kept he company and a disturbance happens and Claire lifts the musket she has  kept at the ready for days to protect herself. A local German pastor knocks on the door and is in fear of her safety, the Mullers have lost the daughter, grand daughter and son to The Measel. Claire is in disbelief as all had been well. Some time later Herr Muller appears and after he talks his way in, he is mad and insane with grief, fears that Claire is ill, and proceeds to tell her his story. Claire tries to use 20th century reason and explain illness, that the sickness was not a curse. He hands Claire a bundled fabric parcel, that she takes for the grand daughter’s doll. Muller tells her he has taken care of the witch of the Indian tribe while she unwraps in horror what the package contains.

Claire promptly and in her usual anger filled justice fashion, turns him out. The continuing tragedy unfolds as Muller returns to his homestead and the Indians take revenge.

This episode was the culmination of mysteries and fears that would continue to build in the colonies. The writers and actors succeed in telling us a very brutal reality that is to come, and at the same time show us some hope and compassion that people can have when living in extreme conditions. Murtagh’s changes his mind and does leave the town and turns up on Fraser’s Ridge, whistling “Boogie Woogie Bugle Boy”, to get Claire’s attention. We get that embrace of hope at the end of a long and tumultuous episode. While fans very fervently hope that Murtagh will stay on the Ridge, with story arcs and Murtagh’s chance to live after having everything taken from him in Scotland, he will take a chance and make a change, fight for what he believes. Murtagh has more of a story to tell. There will be plenty of conflicts with Jamie and the Governor’s land grant, chances and turns the character will take in rebellion and the lead up to the War of the Regulators. We hope that the natives, who are no more savages than those that threaten them, will continue to build trust with the people of Fraser’s Ridge and that coexistence can continue. But this is the American Colonies, a place of great hardship and the conflict of those that were before, and those that came after.

As we see in the closing of the episode, young Brianna, who symbolizes hope for the future, approaches the standing stones at Crag na dun and steps through. There is always the future and a chance for our characters to carve out a life in the colonies of King George in North America.

Matt B. Roberts on Bringing Murtagh Back Variety Magazine 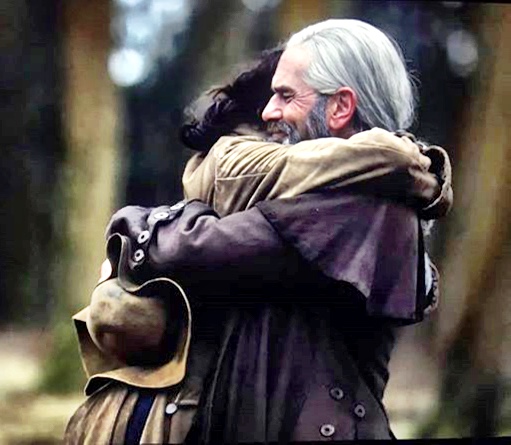 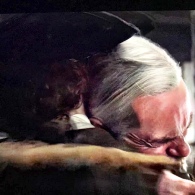 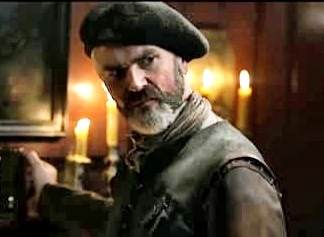 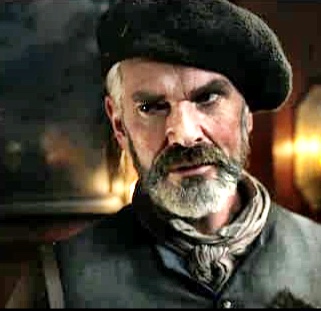 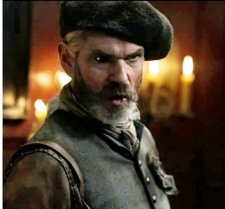 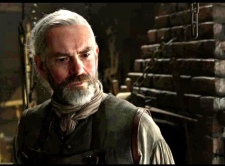