As a book reader of the Outlander series by Diana Gabaldon, and a fan of the series, I am writing this as a four part article, as for the rest of the season there will be four or more story lines playing out in their respective arcs, all of them quite paradoxical. Claire, Jamie and Lord John Grey, then Murtagh, Jamie and the Regulators. The Jamie, Claire and Murtagh paradox from Season 2, redoux. The Brianna, Roger, and Stephen Bonnet paradox. Or is this sounding like that song from New Order, Bizarre Love Triangle? Don’t forget young Ian and his fascination with the Indians, which can be seen as more a conundrum truth be told, what will he get himself into there? All will be played out in the next few remaining episodes. Consider it part of your spoiler alerts.

Paradox: a situation, person, or thing that combines contradictory features or qualities.

What Comes From Blood Of My Blood

Lord John Grey (David Berry) rides up the Ridge to find Jamie, sawing on wood. They greet and the beginning of the terrible guest episode begins.

We find a scene of friendship, with Claire (Caitriona Balfe) and Murtagh (Duncan Lacroix) fetching water from the creek, Claire is teasing Murtagh a bit, Murtagh biting controllably back. Age and old friends. Murtagh admits he must  leave soon, and talks of his Regulator friends, that two of them are going to petition the Governor over the unfair taxation situation, to try to solve the problem the right way, with due process. He must pay his taxes if he wishes to stay in North Carolina.

Jamie’s past comes to Fraser’s Ridge. A past that will bring tears of joy and anguish. It’s one of the seasons reuniting scenes that will play out in stress, conflict and growth for Jamie and Claire. This season, after all, is about reunions and family.

Lord John Grey shows up on Fraser’s Ridge en route to an estate left by his wife, Isobel, who has just passed. The estate is in Virginia, and yes, he has come a long way round for that. With him, is young William (Oliver Finnegan), Jamie’s illegitimate son with Geneva Dunsany. Several layered positions of conflict arise. Jamie, has a son he cannot publicly acknowledge, but is thrilled to see. As always, Heughan is running the amazing facial control in this episode, the emoting is priceless. Of course he has been troubled for years, that he can have no contact with his two children. One is forbidden by hidden identity, one is forbidden by time. 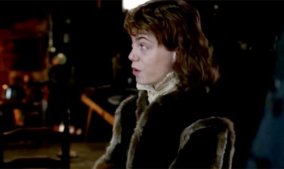 The conflict for Claire is being confronted with the reality of Jamie’s past with another woman, and the living, breathing child it created. She has come to terms for the most part with the fact he has a son. But the reality of seeing the child stirs up emotions. Also, she must control herself in front of the child, and the attraction that Lord John has for Jamie has not gone unnoticed by her. She and Murtagh chance upon the young lord, one of the few books scenes kept, who is mercilessly attacked by leeches. Claire of course remedies the situation and they bring him to the house, where Lord John has been telling Jamie of his wife’s passing, and how he wants to keep the secret of Williams birth, for fear of what it will do to him. A controlled scene of adults keeping a secret from a child ensues.

In the most uncomfortable dinner party ever that is politically charged in such a small cabin, nearly outshines the one from season 2 in Paris. Lord John begins offending in high born manner, by going on about how great the new Governor’s palace will be and complaining of the mob that refuses to pay taxes, and has become violent. He is after all, of the privileged class and knows what is best. Murtagh, gloriously keeping his identity in check, barely, defends the common man. He brings up unjust taxation driving families to ruin. The heated discussion is barely kept in check by the parents (Claire and Jamie). Murtagh leaves.

After the dinner, Murtagh is fuming on the porch in his “controlled” manner (Note sarcasm here). He confronts Jamie, how can he count a British soldier as a friend after Culloden? The very one who kept him imprisoned, who of course pointed out that he had helped Murtagh get a doctor to get well in front of the little Lord. However, the man had been talking down the Regulators and saying they had caused bodily harm. And why all the secrecy from the lad, why would Jamie go to such lengths? Jamie defends himself as much as he can, still falling back on the land grant, and people depending on him now. But Murtagh knows Jamie well and can tell, it’s something else. He finally guesses it out of Jamie, the child is his. With classic Murtagh agreement grumbling “Hmmmph”, he leaves agreeing to keep another Fraser secret.

The the next act of effrontery by Lord John, he comes down with the Measles. This forces the doctoring of Claire who must administer to a patient who had brought the son, a deal of anguish for Jamie, and his high born political notions driving Murtagh off. William is reluctantly dragged off to fish and hunt by Jamie so he will not get the Measles. Claire endures days of a fevered Lord John who is overly gentlemen like some days and cuts to the bone on others. For her part, Claire as in usually Claire fashion is straight forward and cut the niceties. The conflict of why Lord John is really there, first Claire assumes it’s to report  back to the Governor on the land grant, then to spy on the goings on with the Regulators. Then the conversation turns to William, and what that does to Jamie, but the real burning discussion is the jealousy both pf them have over time being spent with Jamie. While Claire was away, John had time with Jamie, Lord John jealous that Claire is back and the couple are happily committed. When the fever breaks and John realizes what a cad he has been, he admits the real reason he came was because he wanted to see if he had any true feeling left in him. If seeing Jamie would bring emotion, which it did. He had lost all feeling and had felt nothing for Isobel after her death. Claire, in her way, concedes a few things and they part on better terms.

In a father son interlude, Jamie and Young Lord William bond over fishing and hunting. Jamie reminds him of their time at Helwater, as the secret of that experience has come back to William. There is an altercation with The Cherokee, and each of them defends the other, in which Jamie offers himself as sacrifice since he is the father of the child. William denies this and points out it was his fault. It plays out with a light bloodletting and the two return to the Ridge, to find that Lord John is alive after all and the two can leave Fraser’s Ridge.

The Jamie, Lord John Grey and Claire Paradox will continue in a later storyline, we know this one isn’t over. And at some point as book readers know, Jamie’s children, Brianna and William must meet. It will be interesting to see when the series will bring up that reunion. For now, Jamie has seen his son and how well he is doing. Will he finally get to meet his daughter, Brianna.

Outlander is on the Starz® network in the US, Sundays at 8:00 PM EST, 5:00 PM PST, and The W Network Sundays at 10:00 PM in Canada. Starz App at Midnight Saturdays, and Amazon Prime in The UK and Europe Mondays.