Stirling has been a hotbed for filming these past few years. Filled with history, Robert the Bruce Country, and amazing forests and hillwalking opportunities and many woods and exterior opportunities make it a great place to film. Although crews work tirelessly at all hours and under weather conditions from snow and ice to heat and full on midge attacks, the beauty and hospitality of the area make it a fantastic shoot. Not to mention the fabulous Stirling Castle, with some of the best living history examples I have seen at an estate. Stirling and the surrounding area boast several locations for Outlander filming, including recent filming fo

r Season 5. Oh, and then there are a few films, like the recent Netfix film, Outlaw King, that have filmed in the surrounding areas.

Fall is one of the most spectacular times in Scotland. The tourist numbers go down a bit, and with recent climate changes there have been Indian Summer days a plenty. However it’s still a country of four seasons in a day, so pack accordingly. Stirling is a great place for hillwalking, and locations like Mine Woods, where some of Season 5 has been filmed, is just one such area to have a peaceful ramble. 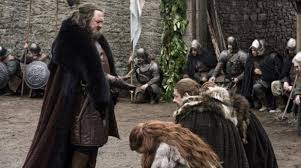 And if you are a fan of great series and film, why not check out the surrounding areas for your favorites. And many other Outlander and other filming locations are within an hour of the city. The city is reachable by train and there are some public buses and touring companies that can get you to these sites.