Updates this week as the cast and crew are getting into the last stretch of filming for season 5. Matthew B. Roberts (@TheMattBRoberts), writer and producer on the show had shown a picture of his heavily marked up book for Season 6, A Breath of Snow and Ashes and a Guy Fawkes mask. What is the message we get here? Rumors have it parts of ABOSAA is being used in  Season 5. Guess you will just have to read it after you hurriedly  finish up The Fiery Cross. 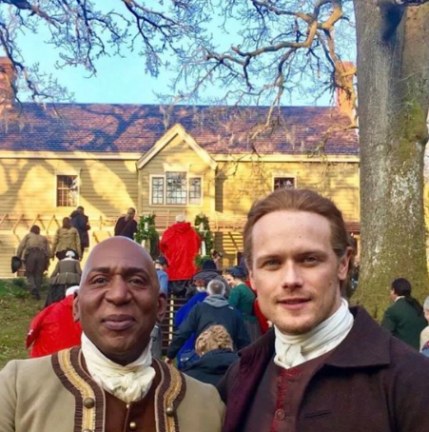 The S5 filming blocks are ending, which means the set up for the conclusion of the season is underway. Sam Heughan and Colin McFarlane (Ulysses) gave us a great BTS shot this week. Large amounts of extras and crew can be seen in the background. No shots of Maria Doyle Kennedy (Jocasta), although her Twitter said she was hopping around in the PNW (Seattle) in the US this week. 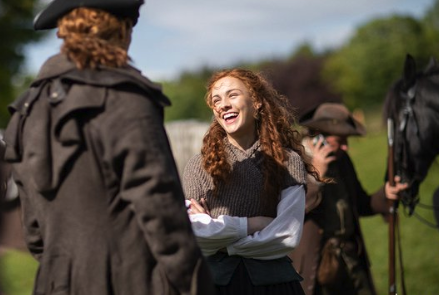 Also seen on set again and acting, or behaving badly were the kittens playing Adso. Apparently a huge distraction with everyone on the set. Adso is a character we follow with great fondness, who becomes a fixture of the big house and Claire’s surgery room. But no more spoilers here. It looks like we are close to a wrap on this season’s filming. That means production will be at least 3 more months. As Matthew B. Roberts has said, he is already on the scripts and John Gary Steele is designing sets for S6. We’ll see who joins the writers room this coming season. The War of Regulation is fast approaching. And after that, the American revolution. 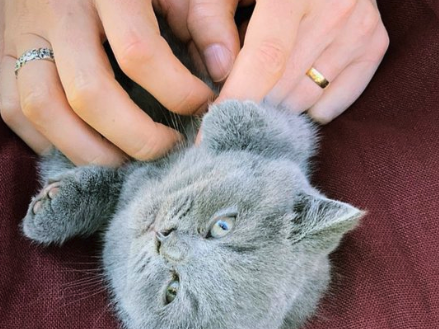 Yes, those are Caitriona Balfe’s hands. Hope they got a lint roller.