It is with great trepidation, I think that’s the right word, caution, taking one’s time, that I finally get around to this recap of Outlander S502, Between Two Fires episode. I usually get these done on Sunday, trying not to rush too much as some of you may still have not seen the episode. I must admit that even though I, like you, rewatch for details a few times, I had to watch this episode 3 times and gather three sets of notes to even see where to go. I usually keep my viewing of other recaps to a minimum as I want to keep my opinions and oppressions not tainted, or I look at them well after. This time I was finding I was peeking around at others as I was trying to figure out how I really felt about the episode. Apparently, all fan feeds and reviews are all over the place in this episode. It may be down to having two very different writers, who have worked on several scripts for the series (Toni Graphia and Luke Schelhaas). There are two separate stories with a third arc. All of the main characters will play with the fire in one way or another in this episode. 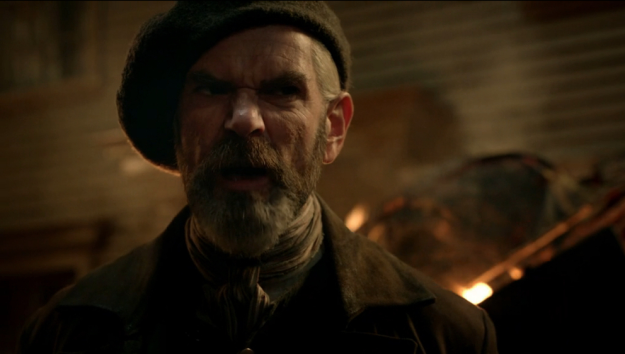 With that being said, where else could this have gone after that gut-wrenching farewell between Jamie and Murtagh at the end of the season opener? We knew it would be Murtagh Fitzgibbons (Duncan Lacroix) going full-throttle into his new clan, The Regulators. Our darkly moving waters, always on Jamie’s right man and God-Father, is without a purpose other than to fight for these men and what injustices they have had. Murtagh has never really left the battlefield at Culloden and the injustices that the King’s Red Tunics bring. He has lived with the oppression of his people and lost his beloved Scotland. So it is with a great fierce force that we see Murtagh step away from that “play fair now” attitude in season one’s Jinty match, he’s tired of being patient about it. It’s all a vengeance that is his now instead of for those he loves. He becomes embroiled in the War of Regulation.

We open on Hillsborough, North Carolina and a mob scene with Edmund Fanning being accosted and other officials being tar and feathered. Murtagh pronounces a sentence on them, they are corrupt and will not allow for due process of law for the common people. As we see later in the episode, while tarring and feathering is seen as a humiliation, it is a very real threat to the body of a person. It is torture. It is vengeance. So begins Murtagh’s fight for the right to fair representation.

To understand a little more about what the movement was about, and what sparked it, and why many believe it leads to the start of the American Revolution, read below.

Jamie (Sam Heughan) has been sending dispatches to Governor Tryon elaborating his search for the outlaw Fitzgibbons (Note that neither Jamie or Murtagh mention the Fraser part of that name) and bring him to justice. Of course, Jamie has done all he can to hide the relationship he has with the man, so he begins a very precarious dance with Lieutenant Hamilton Knox (Michael Xavier). He enters into the conversation in subterfuge, dancing the line of truth and honor, which both men find they have a conviction for, but we learn to have different ways of showing it.

“I admire a man who puts duty and honor above all else,” Lt. Knox

As always, Jamie is being the diplomat that he is, shows his compassion for those who cannot feed themselves. However, we have warning moments of the zealous nature of Lt. Knox’s purpose. He reveals a desire to acquire favor with the Governor, perhaps gain lands of his own if he brings Murtagh Fitzgibbons to hang in New Bern. Jamie proceeds with caution and works hard to show that he intends to follow his oath to crown that he swore.

“Then you’d admire the man who chooses to starve rather than betray his conscience?” Jamie responds.

They arrive at Hillsborough after the riot and are greeted by Edmund Fanning, the Lawyer that Claire (Catriona Balfe) operated on in Season 4 at the theatre. He tells them of the tragedies that have transpired, the tar and feathering and injured parties, one near death. They also have three fugitives. Jamie asks if one is Murtagh Fitzgibbons. 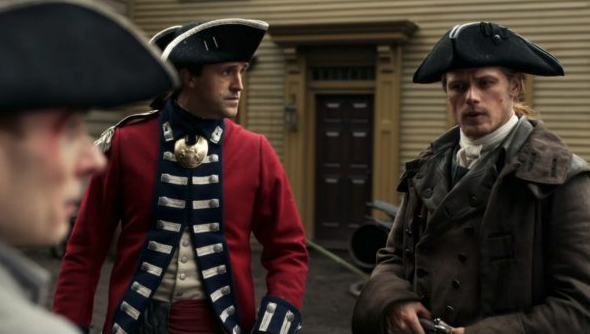 Lt. Knox confronts the three prisoners, who turn out to be some of the men that Jamie tried to offer land on the Ridge to, Ethan, Lee Withers, and Bryan Cranna. Jamie rushes to cover his association tracks with Murtagh and gives a hint that he is really trying to protect Murtagh by going along with the Crown. The men are interrogated by Knox at sword point. When pressed where the whereabouts of Murtagh, Ethan declares that he is Murtagh Fitzgibbons. In the heat of the moment, Knox loses control and runs the man through. Jamie declares that he has just killed a man without trial. Jamie returns to free the men, as we know he would. Of course, after several tense moments of trying to get the not so bright Bryan and Lee to realize he is trying to help Murtagh and to not lead Knox right to him, he tells them to not make it so easy for them to find Murtagh.

Later at the Regulator’s encampment, Bryan and Lee return and tell Murtagh and Herman Husband of their ordeal, and Bryan confronts Murtagh about his allegiances. He criticizes Jamie Fraser. That Fraser is an agent of the Crown now. Murtagh tries to deflect in a nostalgic realization.

“No, he stands with his people, I stand wi’ mine.”

Hauntings and The Rise of The Mrs’s Burke and Hare

Brianna (Sophie Skelton) is still haunted by her rape at the hands of Stephen Bonnet. After hearing on her wedding night that he is indeed not dead and back in the colonies, she has been sketching disturbing drawings of Bonnet. She really cannot talk to anyone about what she’s heard, she keeps it all inside. She is broken out of this trance by a sudden emergency in Claire’s surgery. Rushing to help Claire, she becomes her mother’s conscience and shows an aversion to blood and guts.

A Fraser’s Ridge settler is brought in by his wife with stomach pain and trauma. Claire is asking the wife about what she used as a treatment, she used purging and bleeding, both common barbaric practices in the 18th century, on him. She gave him a Mercury based purgative, sadly Claire backs away and says she can do nothing for him. Brianna assists her as best she can, but we see that she struggles with it, she knows Mercury to be a poison. She is also struggling with the blood. What was clearly the Appendix burst symptoms to Claire, and should have been a simple matter, she cannot do anything. Claire is appalled by the fact that she cannot do what she could have done if she had antibiotics, a simple thing in her time. That and the knowledge to not give people poisons in the first place.

After a conversation with several women making candles at the Big House, Claire offers her 20th-century knowledge about poisons, and the women scoff. She decides that she must use a bit of subterfuge to help enlighten people enough so they can take care of patients. After Claire enlists the help of Roger to create a fake burial of the man, she uses him for an autopsy. Brianna confronts her about using her 20th-century practices in the 18th-century, how it could possibly change space and time if she brought things like penicillin forward in time. Claire points out they have already altered time by coming through the stones, and that Brianna came to warn them about the fire that might kill them. How was that not altering time?

Roger also gets some modern medicine when Claire checks his eye vision after his unsuccessful hunting with Brianna. And let’s just go back there for a moment, Brianna shoots a turkey, blood involved. She lets Roger pick it up. But back to Roger, who other than a bit of normal short-sightedness in one eye, is fine. As Roger concedes, he’s just a bad shot. A philosophic discussion around Roger wanting to go back to his own time, and Claire suggesting that they should, it would be safer for the three of them. Roger points out that they don’t know if wee Jemmy can travel. That was your foreshadowing moment, folks.

Let’s not forget that Claire also realizes Brianna is having doubts about working with the dead. So she enlists the help of Marsali (Laren Lyle), who has fine butchering skills. If she can refine that into helping by stitching up patients and assisting at surgeries, Marsali with her tough Scottish resolve could help to ease people’s fears over seeking help. We’re in for a treat as the 18th-century version of Burke and Hare start up their own side series. 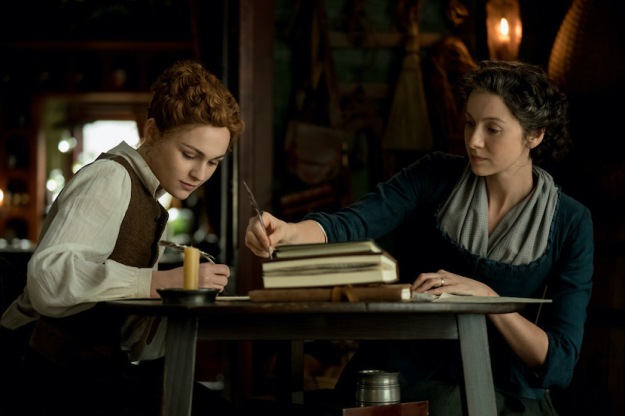 So Claire tries her hand at some preventative medicine, by using the name of the doctor who’s medicine box she has, to write informative treatments coming from a male doctor of the 18th-century. Clever girl.

That House as a Character

Okay, so I have to let this one go I suppose, but put it out there for you. Many book fans have been dying to see the Big House. Of course, we love Jon Gary Steels’ amazing design work, however, such a house would not have been feasible in those times, only if you were a wealthy merchant in a large city perhaps. I guess it’s lucky for the Frasers that the 1798 Window/Glass Tax hadn’t hit yet. Let alone, where they would get all that glass? And window glass was not as refined as it is today. Just another thought I suppose. I guess that wild whisky that Jamie is crafting is getting some serious barter going on. Tell us your thoughts on the Big House.

And let’s not forget Claires experiments with penicillin fishing. Back to the glass thing. Glass bell jars we used to protect plants and create a greenhouse. People had just started keeping specimen plants. If you are trying to catch spores, they cannot go through the glass, so I hope that she remembers what every good doctor knows, that air is the transport for microbes and dust, where spores like to float.

Just Who Were The Regulators?