It’s one of the creepier stories in the Outlander books, the acquiring of the young Beardsley lads as part of Fraser’s Ridge. It’s one story many were glad to see had been kept. It’s official, we’ve begun the episodes I like to subgroup as “Please won’t you be my neighbor?”. Sadly much of the neighbor meeting is far from that warm and fuzzy childhood program feeling. Instead, the reality of the frontier and colonial isolation, of those forging to make new communities, and those taking advantage of tax gauging as we have already experienced with the Regulator wars starting up. It’s that very poor and backcountry situation where many create their own forms of justice. Men roam and raid, just like they did in the old country, and it wasn’t always the natives you needed to be afraid of, there were those that tried to make it look like it was Indians, when it was really smugglers and brigands, just like back in Scotland. Well, you wouldn’t want it to be perfect, would you?

Episode 503 Free Will shows us the theme of free will and making decisions. It’s an episode about making choices. We open with Claire and Marsali in Claire’s Surgery with the multitudes of mold experiments that keep failing (It is going to dawn on her to stop covering them with glass, right?) And a time-lapsed exposure of mold growing, notice that one does not have the glass over it.

Claire is questioned by Marsali on how she knows about searching for the mold, did she read it in a book, etc. Claire is determined to go against history, that it be damned. She is going to bring penicillin discovery forward 147 years. However, remembering her witch trial experiences, she turns the questioning around on Marsali and in a Socratic manner, starts asking her questions about why the mold could be significant. Marsali starts using reasoning and we get to see more of the multitudes of glass bell captured experiments and workmen still working on the house.

Jamie finally returns from Hillsborough and tells Claire that he must muster up the men that swore fealty to him and aid Lt. Knox in persuing Murtagh and the Regulators. He is worried about leaving the Ridge so close to harvest. Claire declares that she will go with him, and of course, he argues no with the typical Claire getting the upper hand, you will need a doctor with that many men, and Claire will ride with a large group of men, including the new Captain Roger MacKenzie. 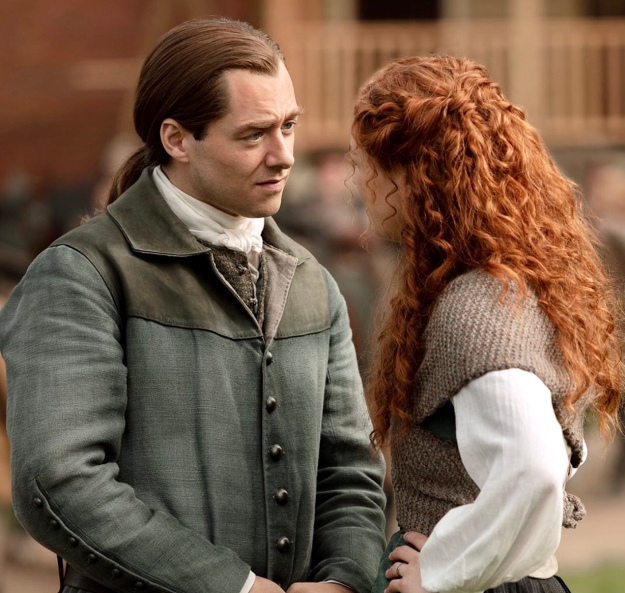 Jamie meets with Fergus, who hands him a letter he secrets away and instructs him to write up an advertisement to be published regarding a call to arms. Fergus hastily grabs one of Claire’s medical papers and writes on the back of it. Now, a little foreshadowing of future trouble will no doubt come of this. Either her carefully tracked experiments with mold or her writings of care in the home for sick persons encouraging boiling of water (Dr. Rawlings Recommends). We’ll see later what trouble it will brew. Could it be a note that was meant for Murtagh? 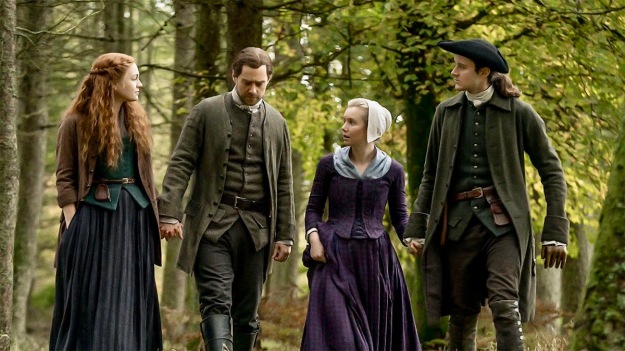 When the group breaks for setting up camp, Jamie pulls Claire aside and tells her that there have been sightings of Bonnet, up to his old tricks smuggling in Wilmington.

As if That’s Not Creepy Enough

When the Frasers leave with their band of men, they run across young Josiah stealing their food from their encampment in the morning. However, it’s not Josiah as Jamie appears next with the young Josiah (Paul Gorman playing both). It’s his twin Keziah. Josiah must tell their tale of woe to the party, about being indentured at 5 for 30 years to the Beardsleys, and Kezzie losing his hearing due to beatings from. Jamie still wants Josiah to be a hunter for the Ridge, especially if he is gone fighting, so he tells Claire and the Beardsley lads he is going to buy their indentureship from Aaron Beardsley. 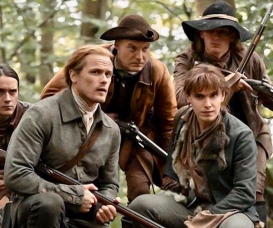 So Jamie and Claire set on a side adventure to the Beardsley homestead.

Rules for horror films set in the woods:

The set of the buildings is reminiscent of many a horror flick we have seen. The “Don’t enter that cabin in the spooky woods!”  warning is lost on Jamie and Claire. He is determined to get the lad’s indenture papers from Beardsley. It doesn’t take long for Claire and Jamie to come upon the very troubled young Fanny Beardsley, the fifth of that name. Mr. Beardsley is a cruel man and has worn down four previous wives. Fanny tries to find them the indentured papers and swears that Beardsley is dead. She just wants them gone. After some time bumbling around in the cabin, dealing with goats, and hearing a noise from upstairs, Claire, who always manages to land in it, finds the source of the most putrid odor she has been smelling. Now, being trained medically, granted there was both goat odor and excrement probably in the house, but what physician doesn’t know the smell of what she encounters on the pallet? A very emaciated and flesh filled with maggots Beardsley.

Horrified and disgusted, the Frasers try to revive the man, whom Fanny tried to kill. Fanny explains that the man was trying to harm her when he had a fit. But Claire sees evidence of wounds being reinjured or not allowed to heal. Fanny was making death a very long torturous affair. Claire and Jamie demand to know the story, and in the middle of an altercation when Fanny tries to kill him, she goes into labor. After Claire delivers the child, Jamie remarks the child is black. Fanny finally opens up about life for her and the poor lads, and how the apoplectic (stroke) Beardsley had mistreated all his now dead wives, and that one wife is a ghost she talks to on a regular basis. So people do just go mad in the backcountry.

The purpose of this long drawn out story? We see the kinds of other people that make up the society of the colonies. The child, who Fanny abandons after conveniently finding both the deed and the indenture papers, is left with the Frasers. Claire discusses raising the child on the Ridge, Jamie brings up that they could try to have another child. What Claire really needs to discuss with Jamie is that she feels that Brianna, Roger, and wee Jemmy should go back to the 20th century where they will be safer. Jamie, who has spent most of this season trying to not lose Brianna, who he has just given in marriage and now is being told that she should go back to her time, digs in a bit and reasons that they don’t know if they can go back, or that Jemmy can even go through the stones. At the end of the episode, we see Jamie asking the man if he wants to die, to stop suffering. The man agrees by blinking, as he cannot speak. In the end, we hear a single pistol shot.

Okay, one more episode and finally Adso? Because we need that cuddle fiend. Oh, then there’s that Scottish officer.

Next episode, we meet the even more charming Browns. And you thought the Hatfields were fun. Catch Company We Keep, Episode 504 this Saturday, March 7 at midnight on the Starz App, Starz Channel Sunday, March 8 at 5:05 pm ET 8:05 PT, UK Monday, March 9 on Amazon Prime. 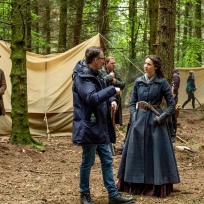