If you haven’t seen this episode, seriously turn back now.

We open with Roger Mac (Richard Rankin) singing Clementine, a very tragic song, to young Jemmy. Brianna (Sophie Skelton) and Roger discuss leave-taking, how he is going off to fight. Brianna and Jemmy are staying with a family acquainted with Aunt Jocasta. History is discussed a bit. Roger reluctantly leaves, he is already running very late. 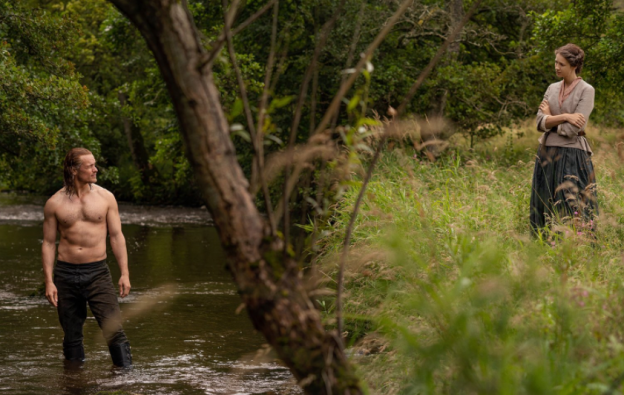 Jamie (Sam Heughan) and Claire (Caitriona Balfe) are encamped with the militia near Alamance Creek. It is the morning of his 50th Birthday. He and Claire discuss taking stock of one’s life. He muses that he has lived longer than his father, his parts seem to still be working. They also discuss Culloden, that fateful morning when Jamie and Claire kill his uncle Dougal. Remember Dougal? Claire sings “Happy Birthday To You,” very Marilyn Monroe like, while peeling off her Cutty Sark, and creates a morning seduction as only Claire can.

Governor Tryon (Time Downie) readies the troops and militia to get ready to fight with commanding officer Captain Bullox. They have cannon and close to a thousand men, and as Jamie tries to deter and talk Tryon out of conflict, remember another glorified leader needing to be dissuaded, yes, there are many likenesses to the battle for Culloden in this episode. The king’s forces were outnumbered but had military might with cannon and calvary. Jamie tried to pressure Prince Charlie to not fight. History is repeating again. Captain MacKenzie is late to the call, as noted by Jamie and the men. It appears Roger is always late.

Jamie gives the men a yellow cockade to help identify them as militia, as the red armbands were not readily seen. He emphasizes that this is important as fighting in this terrain would make it difficult to know who your enemy or comrade was. The militiamen were not wearing a uniform and looked just like the Regulators. Isiah Morton turns up at the last, angering the Browns who are always a powderkeg waiting to go off. They threaten to kill him. The news comes the rebels have ambushed the munitions carts, angering Tryon and the Captain.

The minister Rev. Cauldwell turns up with a grievance letter from the Regulators, he urges to try to settle the matter without bloodshed. Tryon takes it as an insult that the Regulators are asking for Parlez. Jamie tries to get Tryon to Parlez back. Anything to stop the bloodshed. Remember Jamie’s reasonings with Bonnie Prince Charlie?

In Hillsborough, Brianna is being entertained by the Sherston’s (Matthew Cole and Charlotte Asprey). Hugh shares that he has heard that the Regulators have made camp at Alamance Creek. Brianna is bothered by a trace of memory. That name. The next day she is racing on horseback to the camp to worn her Da. She finds Jamie, Claire, and Roger discuss the battle to come. She tells them that her professor had said the Battle of Alamance was considered the spark of the American Revolution.

Jamie seeks to warn Murtagh, to get him to lead his men away as the Regulators will be defeated, shades of Culloden again. Brianna argues they cannot change history, if they do, the American Revolution may not happen. Jamie is desperate to save his people, the militia, and Murtagh from bloodshed. Roger offers to go warn Murtagh to leave if he cannot persuade his men to follow. Poor Roger, he always seems to find trouble. Jamie gives him a white kerchief to use as a truce, to wave as a banner, and to show the cockade should the fighting begin. Roger leaves that night and heads to the Regulator Camp.

A Man With Nothing to Lose

Murtagh is whipping up the fervor of the men in his camp. They outnumber the Troops and Militia. But as when Roger turns up in the camp and talks to Murtagh, they talk in a tent as Roger tries to lay down the facts. Murtagh argues they have numbers, he argues that they do not have calvary and the cannon power that the groups have. He delivers the message from Brianna, Murtagh knows they are from the future and have prior knowledge of history. Murtagh does start to come around, maybe he has learned from Culloden. He tells Roger he cannot stop the men, they are determined. Roger begs him to leave, save himself for Jamie’s sake. Roger waits in camp with Murtagh to hear the response to the Treaty they have sent. The next morning delivers the Governor’s reply and Murtagh reads out the response. The governor wants a fight. Roger leaves the camp to head back.

“His blood will soak this ground!”

As Roger’s luck will always have it, he bumps into his many times Great Gran Morag MacKenzie, who he had first met on Stephan Bonnet’s fateful ship. She remembers him and he is set to try to convince her to get her family away, they are all in danger. She points out they have nothing to go back to. Roger on impulse hugs Morag. Then, we hear a familiar voice, one demanding that Roger step away from his wife. It’s none other than William Buccleigh MacKenzie (Yes, Graham McTavish), Dougal’s illegitimate son by Geillis Duncan, his ancestor. He sees that Roger has a yellow cockade and will not let him return to the militia despite protests that Roger aided Morag on the ship and was also a MacKenzie. Roger is knocked out with a rifle butt and taken hostage.

Back at the militia camp, Tryon insists that Jamie don the red tunic of an officer. Jamie is of course taken aback, and forced to wear it or betray his true allegiance. Jamie is faced with finding Roger Mac who has not returned and must warn Murtagh if Roger failed. He fights with himself as he dons the red begrudgingly. He kisses Claire goodbye, and she is the only one who truly understands how distasteful the wearing of that red is to Jamie, what it stands for.

Claire and Brianna ready the field hospital tent.  Brianna is distressed, there has been no word of Roger. Jamie readies his men, telling them to keep an eye out for Captain Mac, he has not returned. The troops spread into a formation to fight, against a single line of Regulators. It’s definitely a trap and ambush tactic, Jamie recognizes it. There is an exchange of fire and Tryon takes the bait, advancing. In the charge, young Isiah Morton (Jon Tarcy) is shot in the back. Jamie tells the men to fight hand to hand as their combatants are doing, it’s highland fighting style, and to show mercy and take captives. 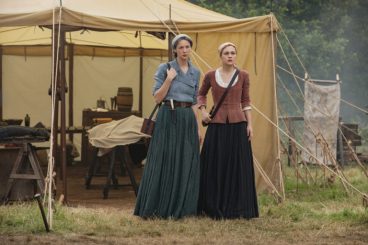 Back at the hospital text, Brianna gets more aggravated at Roger’s absence. Isiah Morton is brought in with his wound, the Morton’s are in the hospital and tell Claire not to treat him. She checks his wounds and finds he’s been shot in the back while running to the conflict. She accuses the Browns of shooting him.

Jamie gets cornered and almost shot by a Regulator until Murtagh arrives and intercedes. Their eyes meet briefly and Murtagh lets down his guard and is shot by one of the militia. Jamie races to catch him and takes him to a tree, begging for help. The following performance by Sam Heughan and Duncan Lacroix will leave you reeling. Murtagh tells Jamie that it is not painful to die. Jamie is overcome and begs Murtagh, saying he takes it back, he does not release him from his oath to protect him sworn to his mother. Desperate, Jamie begs help from John Quincy Myers (Kyle Rees) and others to drag Murtagh back to Claire. Claire can save anyone.

Murtagh is brought to the hospital tent, and Jamie is desperately telling Claire how she has to save the man. She feels for a pulse and Claire steps away from the body with that knowing look. There’s no saving Murtagh, he is gone. Jamie is in disbelief, confronted with the reality that he has truly fought on the other side from his kinsman, who was really a father to him. Murtagh’s last sight of him was in British military uniform. He is reeling and leaves the tent. Jamie loses control of himself in his grief.  Tryon shows up and Jamie now can vent. Tryon in his usual annoying smugness argues back. Jamie points out that it was an unjust fight and that the Governor has harmed his constituents in a massacre. Tryon brings up duty, Jamie throws down the uniform and tells Tryon he is no longer beholden to him. He has fulfilled his part of the bargain for Fraser’s Ridge.

As he looks around, he sees Brianna in distress. Still no Roger. Claire, Brianna, and Jamie begin questioning all in the militia and troops if they have seen Roger Mac. They finally come upon a hanging tree, where Tryon had ordered some of the captured rebels to be hung as an example. Hanging from the tree is a man with a sack over his head, and a white kerchief hanging from his pocket. Is it Roger Mac? Fade to black.

Somehow in all of this, no one has informed Tryon that the number one wanted man in North Carolina is dead in the hospital tent.

We have lost one of the best characters in the series. I am so deeply disturbed by this and loved the amazing performances by Lacroix and Heughan together. Their last scene together, unless we are treated to more flashbacks as they have done with Frank. 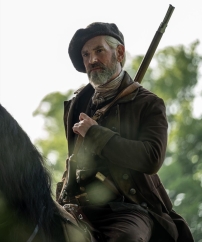 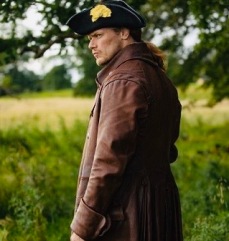 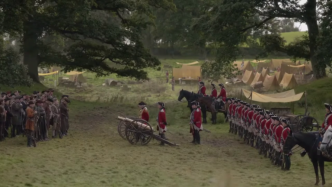 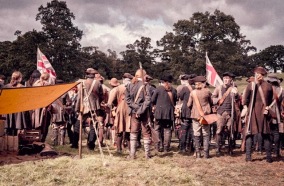 Next, episode 508 Famous Last Words. Catch it Saturday, April 11 at Midnight on the Starz® APP, Sunday at 8:05 pm EST and 5:05pm PST on Starz®, and Monday, April 13 on Amazon Prime in the UK and Ireland. We have a mini Droughtlander with a two-week break. On April 4, Starz® is having a mini-marathon of Season 5.