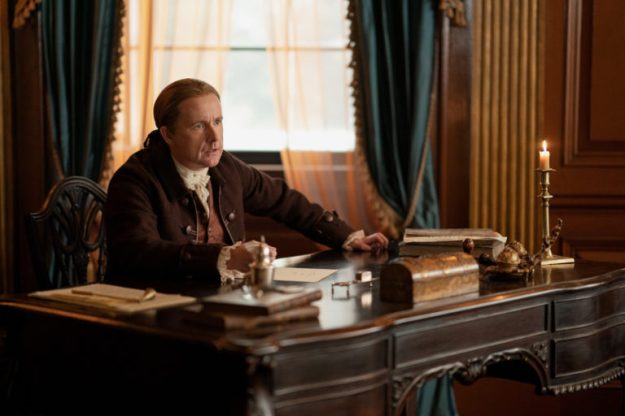 A cautionary tale was begun with the opening episode, America The Beautiful, in season 4. In that episode, Jamie, Claire, Ian, and friends rescue an erstwhile pirate from hanging. And their lives were forever changed. In this tale that has played out until this week’s episode 510, Mercy Shall Follow Me, we met the ugly side of American Colonial Life. The outright lawlessness that seemed to be rampant in the colonies, one that had played out to many a newcomer. For our time travelers, first Claire then Brianna and Roger, would all become victim to one of Outlander’s greatest villains, Stephan Bonnet. The story of Bonnet and his misdeeds forever crossing paths over the years. Until finally he turns up in Willmington again and meets with another Fraser Foe, the lawyer Gerald Forbes. Remember him? Aunt Jocasta’s lawyer and Brianna’s spurned suitor? It’s a tale of ruthlessness, revenge, cruelty, and downright sociopathic.

Birds of A Feather Plot Disaster Together

Stephan Bonnet (Ed Speleers) is a sociopath, one who is erratic, changeable, rages, and a person not able to have a normal life. We open with Bonnet meeting again with Gerald Forbes (Billy Boyd) in a brothel. Bonnet is dressed to the 9s in his refined gentlemanly wear, trying to pass as such. It has been very important for Bonnet to pass himself off as a gentleman as he hopes to claim young Jemmy. Forbes informs him that contacts have been made for a magistrate to sign papers relieving him of any accusations for crimes, witnesses have been found, and their plot to expose Brianna (Sophie Skelton) as a willing participant in Jeremiah’s procreation. This is the diabolical plot to claim Jeremiah as his own and have custody of the child. Forbes warns Bonnet that he must downplay his activities and that rumors are floating that Bonnet is now trading in the flesh.

He advises Bonnet to keep his activities on the “respectable side”, and Bonnet reminds Forbes that his trading has helped many a gentleman on the shores to bolster their profits. Forbes asks Bonnet when he will get his payment for his discretionary services. Bonnet informs him that Jocasta (Maria Doyle Kennedy) and her recent bridegroom Duncan Innes will meet with an unfortunate accident and that they both shall drink a dram on the porch of River Run in celebration when he has custody of Jemmy and his inherited property. He assures Forbes he will get his 20% of the profits. Forbes informs Bronnet that he is going upriver to River Run as Jocasta has asked for his legal expertise. He shows great contempt for her, and her slights against him when he asked for Brianna’s hand in marriage. He wants revenge and money.

He’s Only a Man After All

The Frasers, Ian (John Bell), and the MacKenzies are themselves plotting in a tavern to pull off the great Wylie’s Landing Bonnet Capture. Claire and Jamie discuss the ending of Bonnet, for he is really only a man after all. Bonnet must be stopped before he harms more people. The pact is made for the men to go to Wylie’s Landing for the arranged meeting to sell whisky by Philip Wylie while Brianna and Claire get some medicinal errands done, to replace a syringe with a glass blown tube, and including a trip to the beach.

The men get to Wylie’s landing, including young Ian who is now in a tricorn and wool suiting to play Alexander Malcolm. Roger (Richard Rankin) tells Jamie he wants to be the one to kill Bonnet, it may have been his daughter that was raped, but it was his wife. Jamie cautions him to be quick to purpose, don’t hesitate or think. Jamie also pledges to avenge him should Bonnet kill him, and Roger likewise. It’s a grand thing they have all bonded.

Of course, when Bonnet’s men show sans the pirate, all hell breaks loose as a confrontation happens in which Roger shows his fine barrel pitching skills. If you can’t kill them, throw them. Jamie then shows Roger the fine art of questioning at knifepoint.

Which is of course what we have been suspecting, that Bonnet is in Willimington and following Brianna and Claire. In a storyline taken from book 6, A Breath of Snow and Ashes, the plot to kidnap and get Brianna and Jemmy is underfoot. Claire and Brianna are having a laugh at the beach, racing each other. Claire is collecting sponges and seashells to get calcium from, always distracted by medicinals, she wanders away from Brianna who is dipping her feet in the waves. She is come upon by Stephen Bonnet, who overpowers her and comes into a confrontation with Brianna. He knocks both women unconscious and takes Brianna after telling her he only wants her and their son. 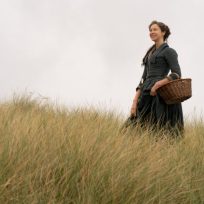 Beauty and The Beast

Brianna awakens in Bonnet’s lair, his house on an island. He has laid out tea for them and begins to tell Brianna of his twisted desire to become a father and a gentleman to be right for Jeremiah. She listens in disgust and pity as she hears how truly demented Bonnet is. He asks for her help in learning how to eat like a gentleman and Brianna plays along to buy time. Bonnet is often one who turns on a person without warning. He shows her a box of toys for young Jemmy and tells her he has a present for her. It’s a beautiful dress that happens to fit just perfectly.

“I want something money can’t buy” “A moral compass?”

She tries to play along with his whims and almost succeeds to talk him into letting her go. She fakes telling him the story of Moby Dick from a book on husbandry, a story that is not written for years to come. He starts telling her his back story, his fears of drowning in the sea, the dark. He even tells her that he had no mother or father, was nearly killed by those he thought friends. No one ever comes to save him from his nightmare. Brianna softens a bit too much.

“You can’t make someone love you.”

To punish Brianna who has appeared false after trying to persuade him to let her go get Jemmy and prepare him to live with Bonnet, he realizes she is stalling for time, he has it on with the wench from the “Mare” he fancies from the brothel has come to help with breakfast, and ends up being breakfast instead. Brianna begs her assistance when he leaves. The woman says she cannot help her for fear of Bonnet as he is prone to violence. Brianna begs her to tell her parents where she is. Bonnet makes arrangements to sell Brianna.

Claire rides to meet the men who have come back empty-handed from their meeting and informs them Bonnet has Brianna. They race back to Willmington to find out where Bonnet could have taken her and run into Philip Wylie. After painfully interrogating a fearful Wylie, who is in more fear of Bonnet, he informs them of a brothel, Mistress Sylvie’s where Bonnet frequents. Yeah, the Frasers are off to deal with yet another brothel madame. They’re good at this game. Roger and Ian are instructed to go to the tavern to find out information about Bonnet there.

Meanwhile, our duplicitous Forbes has arrived at River Run to an audience with Jocasta, Duncan, and Ulysses (Colin McFarlane). Jocasta and Forbes ask to be alone and Jocasta goes into a shocking revelation for Forbes: She wishes to make gifts in her lifetime from the bounty of River Run. She starts naming off all of the children of Jamie and his adopted son Fergus, £200 to Ian, £1000 for Brianna and Roger. As Forbes makes a list, he becomes more and more enraged and sarcastic. His 20% of profits are going out of the window. He rounds on Jocasta and starts telling her off.

She is aghast, and he grabs a pillow and begins to suffocate her with it. He is almost successful until Ulysses grabs him from behind and snaps his neck. Incredibly bereft Ulysses races to a collapsed Jocasta’s side, calling out to her with love, “Jocasta!”, finally she breathes air, as she comes to, he gently kisses her hand. 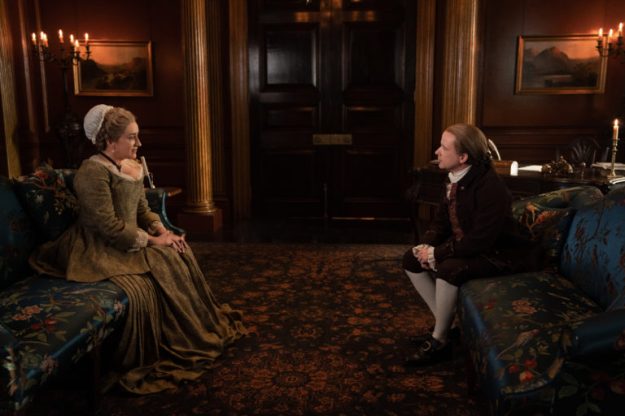 Claire and Jamie come to the brothel and Mistress Sylvie mistakes them for a client couple. After Claire becomes forceful and begs help to save a young girl from Bonnet, the women all look around at each other, not wanting to get involved. Later she addresses the whore that had been Bonnet’s favorite. She claims to have never heard of Bonnet and turns away. Claire, seeking her medical knowledge as a lure, tells the girl of her condition, uneven legs that a simple fix could be done at the cobblers that would release her limp and back pain. Reluctantly she tells them the island where Brianna is a hostage.

Meanwhile, Bonnet has brought another captain to look at the prospect of acquiring Brianna. He starts looking her over like a fine horse and then makes the mistake of looking at her teeth. She of course promptly bites him and things get a bit ugly and Bonnet offers to sell her for a mear £6. The bargain is struck and Bonnet drags Brianna out to the shore where the captain’s man has his money. They are set upon by Jamie, Roger, Claire, and Ian on the dunes and a fight breaks out. After they secure Brianna, Roger chases down Bonnet and beats him soundly.

They all agree to bring Bonnet to justice in Willmington and Roger suggests they contact Tryon who owes them a very big favor for nearly killing Roger, and have him contact the new Governor about Bonnet’s crimes.

And so it is we find Bonnet being sentenced from shore being tied to a mooring and sentenced to death by drowning his one great fear. After the tides begin to come in and he is screaming and distressed, he is shot by Brianna and put out of everyone’s misery.

They all agree to bring Bonnet to justice in Willmington and Roger suggests they contact Tryon who owes them a very big favor for nearly killing Roger, and have him contact the new Governor about Bonnet’s crimes.

And so it is we find Bonnet being sentenced from shore being tied to a mooring and sentenced to death by drowning his one great fear. After the tides begin to come in and he is screaming and distressed, he is shot by Brianna and put out of everyone’s misery.

And so ends the timely fate of another great Outlander villain. But wait there are more villains to come, we’ve only just met the Browns. And with that we leave you to prepare for episode 511 Journeycake, an episode penned by Diana Gabaldon herself.