It’s official, the longest Droughtlander yet! As official as COVID allows in film production, announced this week that Outlander Season Six is to start up production in January 2021. That is, if we do not have another world surge of virus. Crossing fingers, here we go.

What that means is that we are looking at a late fall 2021 airing date at the earliest. Well, it’s a conservative guess at this point. Why so long?

Outlander has a huge cast, the background actors alone take a lot of consideration. Casting for these usually occurs very close to production filming. The production is working with a new set designer, which means everyone will have to get used to how that build is going to go. While scripts have been near completion for months, casting for the upcoming guest cast this season has been put on hold or not announced due to the on hold status of production. And filming in winter means freezing cold Scotland, even on sound stages that are somewhat insulated with lighting and builds. However, the outside will be formidable. This means that even the filming blocks may be jumbled and not in order to take advantage of the weather.

So, what will you be doing to bide your time until this time, next fall?

Re-Read all of the books published so far in the Outlander Series, for the 5th time.

Read all of the Lord John Grey books.

Pull out all those official and unofficial Outlander sewing patterns and sew them up for cosplay. Then create background character costumes. Film your own Outlander side story.

Chase down production news. Warning: This last year they kept many of the filming sites under wraps for along time. Good luck. If you have friends that live in the UK, convince them to check locations for you once COVID restrictions are lifted a second time.

Go in debt attending Virtual Convention Series chatting with your favorite actors on the series. Well, you are helping to keep them busy and fed while everyone waits for production to start up.

As Outlander is straying further from the books at times, and events in each of the books are used as a framework at best. Here are some questions I have had.

In the books, Marsali is not the medical assistant. Claire doesn’t take on an apprentice until the character of Malva Christie appears in the next two books. That being said, Caitriona Balfe has hinted at Claire’s great sickness coming this season. Not to add a spoiler, however if Marsali is the apprentice, then there would not be a Malva issue? We just won’t go there. Perhaps after Henri-Christian arrives, she will decide to stop anything that will make God angry with her.

Our well educated couple has ended up back on the Ridge. In the books, Roger starts hearing the call of religion, becoming a religious man. While this is often aligned in education, teaching in this time period, how will the show bring this in. In the books religion starts making a very big difference, as in the time period, the sciences may have started to come in, but New Englanders were a suspicious lot. While Jamie has tried to hide that he is a papist and the land grant called for the settlers to be protestant, conflicts arose on the Ridge. While not one of my favorite aspects of story line in the series, I am wondering how series Roger is going to handle this and what the writers have in store.

Brianna on the other hand, becomes the Ridge’s Leonardo Da Vinci in a way. Look out for some sciency things creeping in. 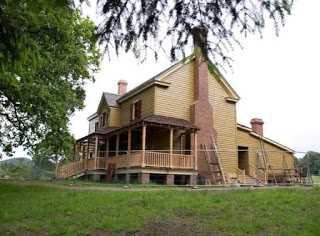 Don’t Get Attached to The Big House

Yes, the portents of doom in an article reporting the deaths of James and Claire Fraser by fire should be the hint. The house is amazing and beautiful and we love every detail. It’s Jon Gary Steel’s last season. They worked so hard on it. Outlander has fire bugs, and not just the flashing bugs in the books.

Lord John Grey is Back to England

With Ulysses as companion, David Berry has made statements that he has left the show. However, that could be a subterfuge or really, he hasn’t been written back in yet. Young William Ransome, Jamies son, comes back to New England to participate in his first campaigns of The War of Independence. Of course John Grey comes back to try to find him. Now, if we get seasons 7 and 8, we should be getting into the meat of The American War of Independence. And yes, it’s longer and bigger that that wee battle of Alamance. So this could drag out for two more seasons. In which case Lord John Grey will turn back up.

Oh, and this changes up another storyline of Ulysses and Jocasta in the books. For now, they are parted. Book readers know the one.

So, now that Jamie has lost Murtagh, he will be dealing with Richard Brown wanting revenge, and a desire to see his son. After he delivered the body of his brother at the end of season 5, he was told that Richard will do what he needs to do. That said, Jamie has an enemy in the guise of a man who will use the law to get revenge on Fraser’s Ridge. In the background of this, Jamie has told Brianna that she has a brother. Some foreshadowing of young William coming back, and the delicate dance of making sure he never finds out that Jamie is his father.

There are so many questions. What are some of yours?