Duncan gives you a little insight to his mysterious ways, and business ownership rules.

This lad is just way too happy all of the time!

Just in time to cheer you up a bit as we all go into COVID restrictions again. May the farce be with us!

Thank you Steve and associates for such fun!

As the world slowly crawls out of COVID shut down, we know that actors are chomping at the bit to get back to it. We, the audience, meet with them in online interview sessions as virtual experiences. Many people in productions around the world are trying to get back in action. So this will be the longest Droughtlander to date. Are you ready to get through this?

You’ve just got your Season 5 DVDs and are planning watch parties with friends.

Things To Consider, And There May Be Spoilers

We know season 6 will center on the next phase rolling up to the War of Independence. Remember, Independence was declared but there were years of war afterwards. Readers of the Outlander series know that there are several years of plots and intrigues before war officially breaks out, and all the ugly lawlessness that leads up to it. Speaking of fallout, Lionel Brown’s corpse delivery sets off a revenge feud that will follow Claire and Jamie through the next few seasons.

Will we get season 7 and 8 announcements soon? It’s a struggle not knowing when production will start back up. It was set to happen this coming month, however the UK and Ireland are going back into restrictions. Production around the world is starting, then getting halted.

Will we get back to some of the book storylines, like the affair between Jocasta and Ulysses. If you didn’t see that one coming, it’s another book storyline. Ulysses has been Jocasta’s eyes for twenty- plus years. Phaedra’s absence during this season, was a mystery for many of us, being as she was Jocasta’s body slave. We hope we will see her return this next season. And when/if she does, some interesting developments will occur. After all, why build her character up so much in Season 4?

All of the Frasers have now dealt with rape. It was sad in the books, and now onscreen. How do they all cope with recovering from such a thing as a family. The only one who has escaped is Roger, who was instead violated by nearing dying and losing his voice. BY the end of the season, Roger has regained a new voice, one where his Father-In-Law shows him some respect at last.

And there will be a whole slew of new settlers on the ridge. Some for good, some for far worse. Besides, the Browns’ can’t be the only villains. That’s too easy.

What do you think they will add or keep in Season 6?

Need to find a present for an Outlander fan and they keep buying everything Outlander? Or really want to cheer yourself up for the holidays and get through that Droughtlander time. Oh, did I mention there is a raffle fundraiser to help Sam Heughan’s charity My Peak Challenge raise money for its charities involving blood cancer research and support?

12 Days of Caroling or 12 Outlandish Days with Outlander actors, where you can also help fund raise for My Peak Challenge charities by purchasing a raffle ticket for a membership with MPC. Graham McTavish, Annette Badlands, Steven Cree, and Lotte Verbeek to name just a few of the actors participating. The actors will be reading from A Christmas Carol by Charles Dickens. Or a bit from the 12 Days of Christmas and the actors holiday remembrances. Perhaps a carol, a song for the holidays?

Please note: This is not a fundraiser by My Peak Challenge as is produced by © Himber Entertainment Worldwide Inc., 2020. Since some of the packages are high in price, you may want to do some research on the company. I haven’t found much in the entertainment industry about them.

We’ve missed our Angus, played by Stephen Walters in Seasons 1 & 2 of Outlander. Giving us one of the best death scenes as a character in the battle of Prestanpans, Stephen has kept busy with a few other series since leaving Outlander, namely Shetland Season 4, Tin Star, and Into The Badlands. Coming up there are appearances in Silent Witness , Seven Times (2020), a long-running crime scene investigation series, and Anne, a film at ITV in post production.

However, along with Stephens musical endeavors, he has caught the Podcast Bug during the COVID shut down. His show, Radio Rodger, is Stephen creating everyday people calling into his show on various topics. Watch the space for new projects.

Stephen is also participating in the 12 Days of Caroling or 12 Outlandish Days with other Outlander Actors, where you can help fund raise for My Peak Challenge charities. Graham McTavish, Annette Badlands, Steven Cree, and Lotte Verbeek to name just a few. The actors will be reading from A Christmas Carol by Charles Dickens.

Oh, have you got your copy of Clanlands Book yet?

Deep beneath the English Channel a small army of well-trained war criminals have seized control of the Eurostar, taking four hundred hostages at gunpoint. Their plan: to blow up the Channel Tunnel and declare economic war on a government that has its own fair share of secrets to keep. One man stands in their way – SAS operator Tom Buckingham who is hiding somewhere inside the train. Alone and injured, he’s the only chance the passengers have to get out alive.
Based on Andy McNab’s bestselling novel ‘Red Notice’ Source: British Council Film

For updates on production, check out www.sasrednotice.com and on Facebook.

Other projects, well that Sassenach Whisky is coming for Black Friday, so if you can handle the golden distilled elixir, go to the website and get on the email list. Available to ship in the US to certain states.

Sam hinted at some developments in filming Outlander Season 6, costume fittings are underway and getting ready for table reads for block one filming in January.

So what has our Jenny (Janet) Murray been up to, besides starring on Broadway in The Ferryman? And when will Jenny be back? Fans of the Frasers have missed Jenny, that spitfire sister that Jamie is so close to. In the books, he and Claire are writing very long letters appraising her of Young Ian, and life on The Ridge. She doesn’t make an appearance again for some time, however in the Outlander series universe, that could get changed up. Maybe the end of Season 6? But if you like Laura’s spikey style, here are some other productions she’s in.

You can catch her for a second season of Britannia as Hella, the bounty hunter. Known for her extremely blunt, get it done jobs. She’s recently asked for her weight in silver. Plucky. Check her out in Britannia, a rollicking and sometimes very silly graphic novel adaptation from Vertigo. Druids vs. The Roman Invasion. It’s also an interesting look into the tribes that forged modern Britain. You’ll see some other acting favorites, dressed in some very fun, not so practical attire. Created by Laura Donelly’s partner Jez Butterworth (The Ferryman) and brother Tom Butterworth. 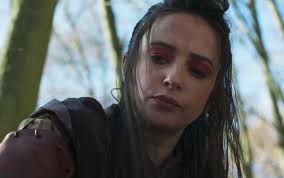 Watch Britannia on Epix in the US, Amazon Prime, and Sky Atlantic, UK and Ireland

What else has Laura been up to lately?

She’s starring in the Jos Weddon series, The Nevers, coming out in 2021, as Amalia True. It’s a Sci Fi drama about a group of Victorian women, or should I say gang, that find out they have mysterious powers. Laura stars as Amalia True, a very damaged woman that really shouldn’t have been given abilities at all. And apparently can drink anyone under the table. Look for it on HBO in 2021. The project was started on Patreon and has resumed production in September. However, as the UK is going back into lockdown, this may delay the series more. Time travel is on the wind.

So, look for Laura Donelly in these productions while you are in the binging during Covid lifestyle.