Starz updated information about their presence at NYCC 2021 this week. It will be a mix of a live and virtual panel about Season 6. Sam Heughan (Jamie Fraser), author Diana Gabaldon and Maril Davis (Executive Producer) will be on stage. Caitriona Balfe (Claire Fraser), Lauren Lyle (Marsali Fraser), César Domboy, and John Bell (Young Ian) will be joining in virtually on Saturday.

You will need to purchase autographs separately and the con is sold out.

Graham Mctavish has done it again. He has been cast in a production in Cornwall, UK and is keeping the production under wraps. Well, sort of. He did drop hints.

All you Game of Thrones fans, the prequel House of The Dragon is filming in Cornwall. So there’s a distinct possibility Graham is rubbing it in Sam’s face a bit, and joining another alumni, Duncan Lacroix who had a small part in the original game of Thrones series.

Being as filming is taking place in the beaches and dunes area, and that’s where Graham was wandering today, it’s probably the likelihood that this is the production.

In nearby Devon, The Witcher has been filming in recent months, however that has wrapped so we think and so was the Star Wars prequel, Andor. But that is said to have wrapped recently as well.

If you are lucky to have gotten to the UK with Quarantine restrictions being lifted, swing by the Cornish Coast. I mean you really want to have a bit of a Poldark Tour, don’t you?

Wizard World Chicago October 15-17 2021 Live, in person even. You must join the Con then purchase tickets for photos and autographs. As of this update, Sam’s photo ops and autographs are not available, so keep checking back. And look, best bud William Shatner will also be at the Con. Sam will escape by being there on Saturday, can’t be responsible for Shatner.

Sam is a big convention nerd and is looking forward to meeting you. He will be appearing Saturday October 16, tickets are going fast. 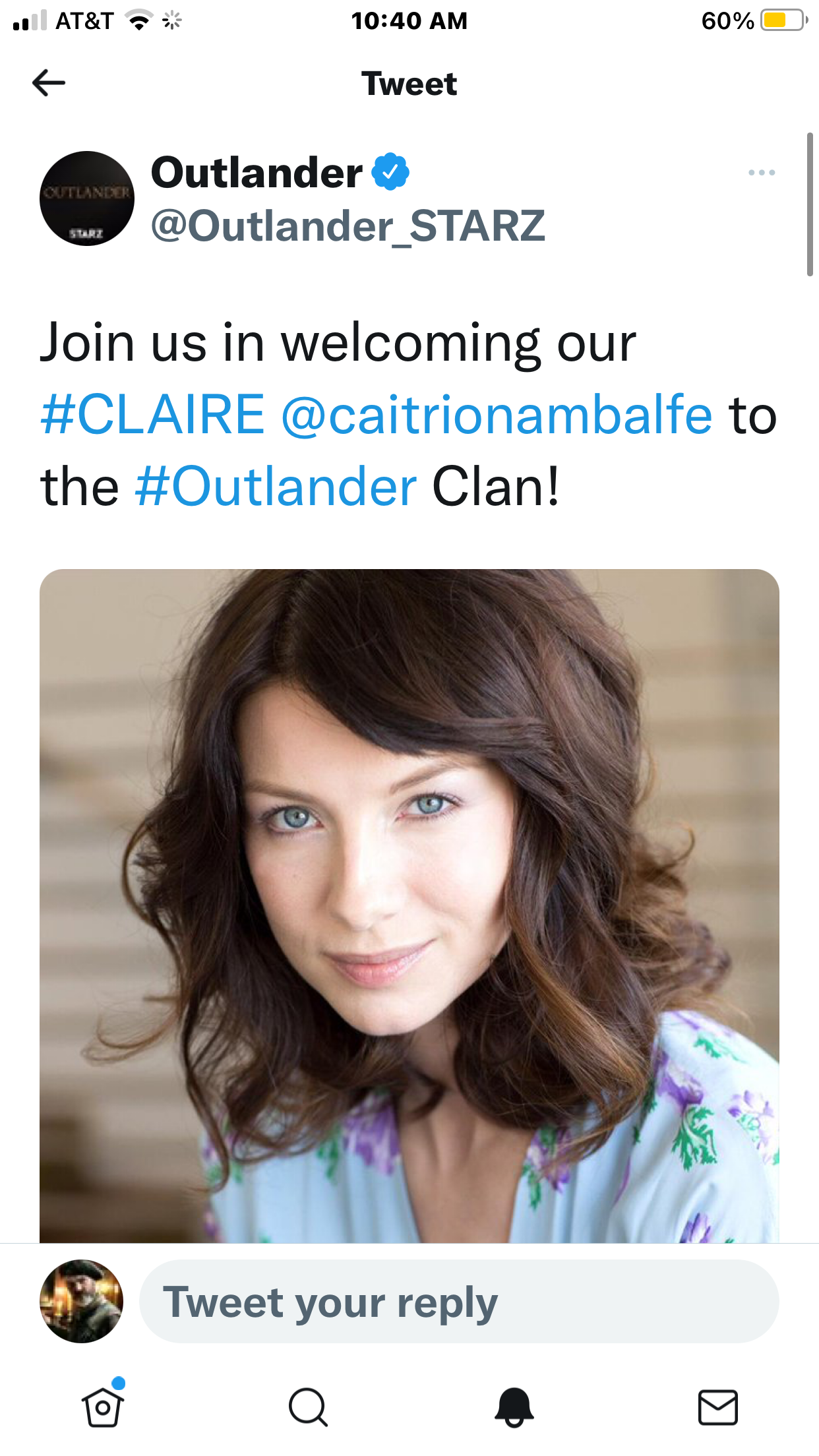 Had to believe for Cait, and hard to believe for us. Caitriona Balfe recently celebrated her 8 year casting anniversary for Outlander. Yes, it’s been that long since we all started the journey of a WWII nurse who fell through the stones into the past. To celebrate, we’ll just look back on Season 1 Claire antics, shall we say.

In Season 1, Claire Randall Fraser: Found Frank’s very evil ancestor Black Jack Randall, gets kidnapped the first of many times, is tortured, marries a second time, starts a fight with just about anybody, saves lives, takes her first life, is raped the first time, befriends a witch, goes on trial for witchcraft, goes to battle with her new sister-in-law, goes Thelma and Louise in the 18th Century searching for Jamie, befriends Murtagh Fitzgibbons Fraser, rescues Jamie Fraser, performs surgery, and sails to France to escape the King’s Justice.

As with every repeated Droughtlander, and many of you turn these into Draughtlanders with Whiskey, wine, and tears,  during Seasons 1-5 weeks long marathons with friends. What you haven’t started yours yet? I just started up Series 1 for the hundredth time. Socially distanced gatherings which unless you are pods is done virtually with Zoom and the telly. At least some of the Outlander cons are making a slow comeback, see Outlander Events.

There will be book references, so spoilers alerts as always.

Speculation is rife as always, so here we will break down some possibilities, keeping in mind that Series 6 will be shortened to 8 episodes and pulling from A Breath of Snow and Ashes, and possibly the 7th book, An Echo in the Bone. The writers have been blending in and cut and pasting story lines into the series to speed up for television translation. The 7th season was announced as going into production in early 2022, which sadly means at an extended 16 episodes will fill out most of the year. Unless they do a split season like they did for season 1, don’t expect this extended season before 2023.

So many of the key players have been seen on BTS pictures, however there has been report  by Matthew B. Roberts as showrunner and producer, that the Murray’s will not make it in this season. Both Laura Donnelley and Steven Cree have continued on in stage and series (The Nevers and A Discovery of Witches respectively), and with the shortened season, could not be added. However, they figure in the book storyline for An Echo in the Bone.

And, since Caitriona Balfe announced the birth of her baby boy this last week, it will take time with family before the actress can begin filming for the next season. It is not known at this point if she is producing on the season definitely yet.

So here is what the main points of books the next 2 books are and could possibly be moved around and edited to the television series writers whims:

Which of the above mentioned storylines do you see being in this shortened season 6 and longer season 7? Will season 7 include events of the rest of the American Revolution that follows in 1778 with Written in My Own Heart’s Blood. The release of book 9 Go Tell The Bees That I am Gone comes in November 2021 and since it will be hard to press this series on for a 9th season, will we see events come to a conclusion after the War?

Outlander season 6: Will Brianna and Roger MacKenzie travel back to 20th Century?

Sadly Comic Con in NYC has sold out. If you are one of the lucky ones to get your badges in time, please keep abreast of the in person Masking and Vaccination rules for attendance as they may change by the con date.

Starz has not announced which guests will be at the con yet, so stay tuned. You can purchase virtual tickets to watch panels live throughout the show.

Virtual attendance possible here :  4 Day Virtual Pass   Starz ® has announced that Outlander will have panels at the event in October 2021 similar to years past, however no guests have been announced for the show as of yet. For tickets and guests information, please see New York City Comic Com 2021