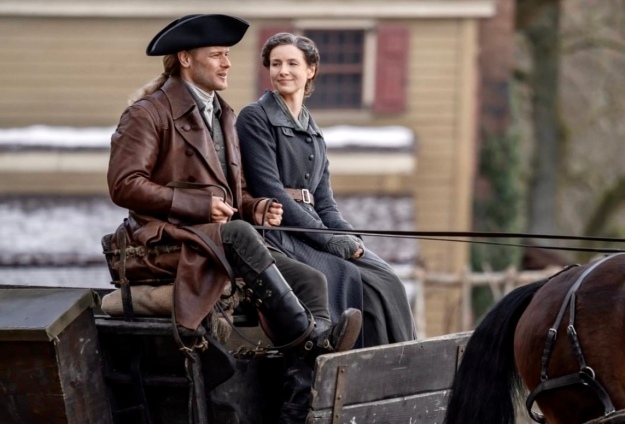 It’s almost over, the longest Droughtlander ever. You are barely surviving, hanging by threads. Binge watching past seasons with pals. Well here’s more for you to think about, as you have probably done a thousand times in the last year plus. So a few spoilers may be ahead for you if you haven’t read the book, A Breath of Snow and Ashes.

Claire (Caitriona Balfe) was and still will be in a fragile state this season. After being kidnapped and raped by the Brown’s her recovery after the  men of Fraser’s Ridge rescued her bruised and bleeding. She will spend the time of Season 6 trying to repair her mental state, as well as dealing with the knowledge of war to come.

In a recent teaser, we see that Major MacDonald brings forces to the Ridge and that Claire and Jamie see a newspaper article about the Boston Tea Party. With the Boston Massacre happening in 1770, Claire, Roger, and Briana know this means that small skemishes aside, this leads down the path to the American Revolution.

She must deal with the fact that she  knows the hsitory of the Revolution, having lived ina a future Boston. She fears for Brianna(Sophie Skelton), Jemmy, and Roger(Richard Rankin). They would not be here in these war torn times if she had not left the safety of the future to be with the man she loved, Jamie.

More changes come to the ridge, and Claire finds she must rely on additional help in her administrations of the Ridge’s population with illness and wounds. She begins training a young Malva Christie (Newcomer Jessica Reynolds) to help with nursing, and when a severe illness plagues the ridge, she may lose all she has.

And as always, her skills as a healer bring the curse of witchcraft upon her, and there will be a murder.

Jamie (Sam Heughan) has the responsibilities of being a Laird piling on him. As part of the requirements of the land grant for Fraser’s Ridge, Jamie must encourage more people to come settle The Ridge. More men from Ardsmuir prison join the community, and with them Tom Christie (Mark Lewis Jones), a past thorn in Jamie’s side at Ardsmuir Prison. Determined to unite the Ridge under all religious and community beliefs, Jamie inlists Tom and Roger to find even more settlers for the Ridge.

While this is going on, he has an uneasy alliance with Major MacDonald form. Why he’s a countryman, he is in the employ of the King, and as a half-pay soldier he must go around and do odd jobs for the government, as well as try to find other employment along the way. This could be dangerous for The Ridge. One of them is trying to convince Jamie to become an Indian Agent for The Crown. When Jamie is confronted with the Browns again, who have formed a Committee of Safety, Jamie knows what that will mean. It’s another form of the Scottish Watch, men with a loose protection racket who exact a price. After the Brawns threats after Claire’s abduction, Jamie decides being an Indian Agent will gain him allies with the Indians and get him reports of an more lootings and burnings.

Jamie receives a visit from his friend Lord John Grey (David Berry), asking Claire to assist his servant, a former Brittish Soldier named Bobby Higgins with the branded M on his cheek. The are going on to Lord John’s Estate and have come from Boston. But is it really Jamie he has come to see, and a game of chess? Lord John gives his view on the Boston Massacre and begins to set a rift between himself and Jamie.

This season, while shortened, will have Jamie making decisions on who to trust, who side to appear to be on to keep the land grants, and how to protect The Ridge and his own extended clan, and his new Indian allies.

A Fresh Look at the Boston Massacre, 250 Years After the Event That Jumpstarted the Revolution