Yes, there will be book and series discussion here. Spoilers.

Season 4 of Outlander encompasses the book, Drums of Autumn, by Diana Gabaldon. However, as we know from previous seasons and interviews with Toni Graphia, Matthew B. Roberts and Ron Moore, the series has been changed and adapted to fit with time constraints and what will translate well with it being a television series medium. That said, the writer’s change the story and add characters, or change the characters completely from the book versions. Fans of the books have been sometimes amenable to the changes, and sometimes there are social media storms. I for one have enjoyed some of the changes, and although some of my favorite scenes have been cut, for example Claire v. the Crocodile and Claire leaving Lallybroch after finding Jamie had married her nemesis Laoghaire, running from Lallybroch in shame and humiliation and spending hours on the moor. I accepted that neither would have translated well to the series, the situations were rewritten and worked well.

With this in mind, will we see young Clark Butler, who played Willie (William Ransom) in Season 3, return in Season 4? Book readers know that this season encompasses the book, Drums of Autumn, and the central theme being the Frasers settling as an extended family, finally finding a place to make and call home. None of which is easy on the wild frontier. After they had settled for some time and built a home, Claire is out gathering medicinals and finds a young boy of about 13 by the river, covered in leeches. The moment she looks him over, she knows who he must be. Features and mannerisms are a reminder of family, her Jamie and Brianna. There was always a chance that Jamie would someday encounter his son with Geneva Dunsany, William Ransom, again. How would they handle this sticky situation?

In this season we see the separation of Claire and Jamie’s daughter, Brianna, through time and how it affects the Frasers. They have a packet of old photos, and Claire has her painful memories of leaving her daughter behind to reunite with her father. Will she ever see her child again? Claire deals heavily with guilt at the separation during the first year at Fraser’s Ridge. William showing up with Lord John Grey, creates another tension. In the books, the feelings of Lord John for Jamie are a source of tension with him and Claire.

We also know the story of Brianna and Roger, played by Richard Rankin and Sophie Skelton, is a continuation in this season, picking up speed and momentum in another time. We also know that they may be time travellers as well.  They both heard the stones in Season 3, only those that can travel hear and feel the pull of the stones. We know that Brianna will go seeking her mother, with official stills and teasers showing Brianna approaching the stones. 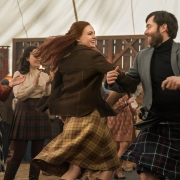 Book readers know that Lord John Grey keeps turning up in Jamie and Claire’s lives over the next few books. Will the series bring young Willie into this coming season? In the book he and Grey visit Fraser’s Ridge, bringing up turmoil for both Jamie and Claire. In the series, Jamie befriends and guides his son with riding and spends time trying to teach him to be a good rider and be helpful and kind, even though his title and situation create a very proud child. In the book, Jamie distanced himself greatly from Willie, knowing that he could not allow the boys true parentage to show, thus leaving Helwater to preserve the child’s future. How will the series writers treat this part of the story, will they bring young William Ransom back this season as was written in the book, or wait for later seasons where he will be a young man and beginning his military career? Then there is the eventuality of Brianna meeting her half brother. In season 3, Clark was aged down. He is only credited with season 3 in IMDb. However, they may have chosen an older actor to play William Ransom in season 4 as he will need to age with the series, and they are keeping this subject closely guarded.

The return of Murtagh has been greatly debated over the last year. Theories have ranged from his taking the place of Duncan Innes, who has not been written into the series so far and marries Jamie’s formidable Aunt Jocasta (Book). There was quite a flurry of Murtagh fans going down that fantasy lane earlier this year. BTS crowd pictures were leaked out in February 2017 of a white and grey haired Duncan Lacroix filming scenes with Caitriona Balfe. In these shots, he is dressed in a manner to suggest he had become a backwoodsman, which would suit Murtagh’s character after many years of being indentured when the Ardsmuir prisoners were transported to the colonies. This lifestyle that closely resembles his Highlander ways, make the most sense. We are all looking forward to perhaps having another Tale of the Tusks moment this season, where our murky Godfather shares his years of separation from his Godson Jamie. 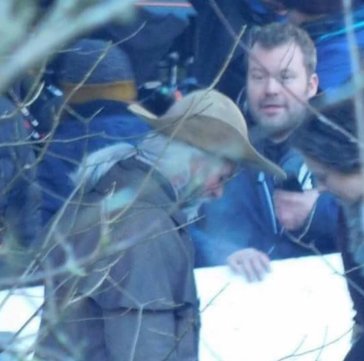 Lacroix’s Twitter account went silent last summer, with speculation of it being hacked, and several other theories. Due to the intense pressure during season 3 where he was constantly bombarded with the #SaveMurtagh campaign from over 30k fans, he may have decided he didn’t need the added silent running pressure, and IMDb shows credit only for 3 seasons on his profile. Perhaps Lacroix, as in Murtagh fashion, likes his privacy. Needless to say, one of the most anticipated possible story arcs is finding out that Murtagh survived a sea voyage to end his days as a backwoodsman, or anything that brings him back into the lives of the Frasers is one of the most eagerly awaited continuations of the series.

Sadly, this could be the season where we finally lose Murtagh, he is pushing past 60 and in the 18th c., not many people make it to that age. Although as Ned Gowan proved, not being married preserved him quite well. We love Murtagh and applaud the series writers for continuing his story. Diana Gabaldon hinted in a recent interview that we would see Murtagh again, which is another departure from her books. There is certainly a new evil villain that will be harassing the Frasers, and book readers know of this villain’s encounters with Brianna Randall. Will Murtagh come to the rescue? He is bound to in some shape of form, it’s in his nature. We’ll be waiting with a dram and a box of tissues for next weekend’s premier.

So join the great Twitter Outlander Premier Party with all of your friends. Stay tuned for the official #OutlanderSeason4 tags, grab more of the official stills released this last week, and start getting ready for your meme creations.

Outlander Season 4 premiers on November with Episode SO4 E01 America The Beautiful on Starz® , Starz® App and Available on Amazon Prime in the UK on November 5, 2018. Starz® app drops at midnight EST.