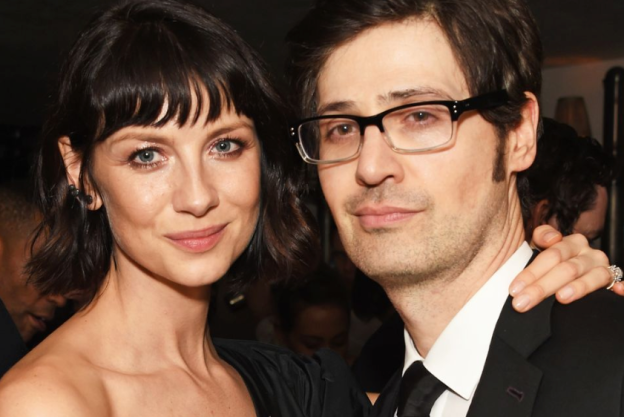 While taking a break in filming in the last two weeks, some of the stars have been seeing to personal business and just plain shenanigans.

Last week, Catriona Balfe tied the  knot with fiancé Anthony “Tony” McGill, a music producer, on August 10, 2019. A quiet church wedding in Bruton, Somerset UK. Hopefully this puts to rest a lot of the ugly “shipping” that has been going on in the Outlander feeds about Cait and Sam. The honeymoon is on hold, as Balfe got right back at it with shooting on Monday.

Duncan Lacroix has been catching up on his Instagram account after weeks of Regulator maneuvers. He found his old business card which makes me just want to run out and get some printed myself. 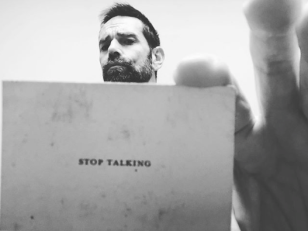 And a few days back, this “Squad” was celebrating. We don’t know if it’s a combo celebration because another block of filming is done, Producer Matt B. Roberts announced they are just past half way on filming, or that Sam’s new Whiskey line, The Sassenach Unique Spirits, has announced its first release, or various combo party things. But if you just look at that table. Attendees included Duncan Lacroix, David Berry, Sophie Skelton. And how is it Duncan manages to find all of the parties?

We’re still wondering on the story behind calling it Sassenach since he’s a Scot. Check it out at Instagram @sassenachspirits. It’s Sam’s new business venture with Great Glen Company. Check out sassenachspirits.com. Much of which will be drunk on the new Clanlands podcast debuting next month with Sam and Graham McTavish talking clan history. Check out the new Instagram at @clanlands. 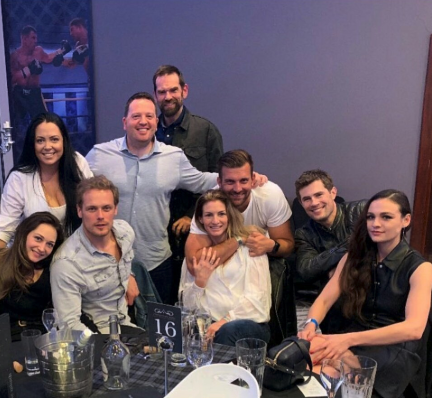 Many of you joined me in following Duncan Lacroix’s recent visit to New Zealand. He wasn’t the only visitor to Graham McTavish’s doorstep. The screenwriter and one of the actors in the ensemble cast of Graham’s upcoming film and directorial debut, This Guest of Summer, Paul Kavanaugh, was visiting and doing some pre-production work with Graham. I recently had a response from one of the co-producers from the crowdfunding page, that yes, filming is still on for November 2019, postponed as all film crews in New Zealand and Australia seem to be booked solid for a really big couple of films. No names here, but there is one franchise that is sucking up all the resources from both countries, and you can find that out elsewhere. 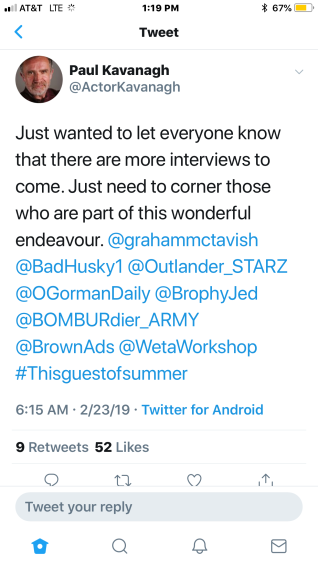 A recent Tweet from Paul Kavanaugh kicked off the preproduction work. It promised to be a very quirky, mysterious, creep-filled film.

Graham has been busy with other projects while he eagerly waits to get filming on his passion project, and directorial debut. The crowd funding officially ended, however you can still contribute to the film I believe, contact them via Indiagogo.

Other actors joining the ensemble are Stephen Walters as Catcher, Lacroix as Flayal, Adam Brown (The Hobbit) as Miss Lady, Dean O’Gorman as Michael (The Hobbit), and Kavanagh is Chris. You can check out some of the other cast here. It’s a male character heavy production, with Miss Lady as the powerful balancer here. Can’t wait for this performance.