While Outlander, the wildly popular series starring Sam Heughan and Caitriona Balfe, is hoping to restart season 6 prep and production, many production crews around the globe struggle with how they will film during a pandemic. Both stars have been contracted for seven seasons, however, there has been no official go-ahead from the studios for a season 7. Prepare yourself for a long shoot that may be broken up into sections depending on if this global pandemic comes back several times as predicted.

Some crews are starting up production plans again in other countries. However, Scotland seems to be still on hold, sadly after announcing building plans for new film studios and announcing Glasgow as the new Gotham for the upcoming Batman film. Filming, just like theater or any other production, requires a lot of people to be in close proximity. How on earth will Jamie and Claire have the, er, famous scenes they are known for? Will all storylines be filmed that don’t require close contact, and camera trickery used to make actors appear close. How will actors adapt with greater distancing in shots? Well, if Graham McTavish can be made to look like a dwarf in his 6 foot plus frame, a film can change perspective and will have to.

Keep in mind that Outlander on a good year bar Scottish weather, can film a season in 8 to 10 months, this production may have to spread out over fall and spring through summer of 2021. Not what you wanted to hear. Sam Heughan revealed recently in a Twitter Q&A that they had started filming and work on episode 601.

Sam Heughan Would Love To Keep The Show Going

A Plan to Restart Production Outline

Productions Halted Around The World

Every year of production, the cast and crew available on set have that big class photoshoot. This one includes the Big House all fans have been waiting for. It’s a house designed by Jon Gary Steel, one of his last big set designs for the series. Cast and crew were saying goodbyes, snaps behind scenes, smiles and exhausted tears this week.

We were also graced with more previews, including another wedding bell scene. What is that, one per season almost? Last season’s handfasting counts, right? For more details, check out Lynette Rice’s article here:

Another thoughtful Matt B Roberts snap 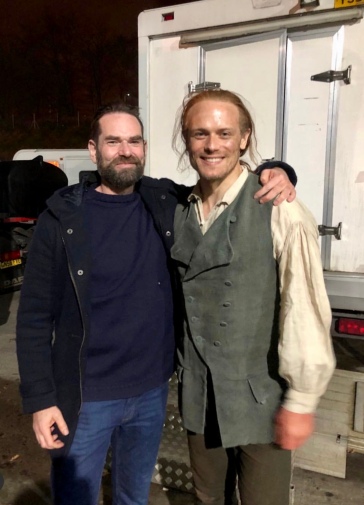 It is with great sadness that Outlander is losing its magnificent Set Designer, Jon Gary Steel. Five seasons, 7 years involvement with production have left its mark on the series with Jon’s innovative style, recapturing ages in the past from the 20th to the 18th century. His talents for finding that amazing pallet for the Paris Apartments, that were upcycled to be Jamie’s Printshop in Season 3, to building the new Big House for Season 5. He announced his departure at the Season 5 Wrap Party.

Many of us will miss his great sharing of current tidbits of production, in the “Guess what this will be” teases, sharing of moments past, and look for that super Easter Egg. His amazing insight and scouting for that just right motif or architectural wall are evident in all set design down to the smallest detail. Always a great champion of his design crew on-site and in LA. 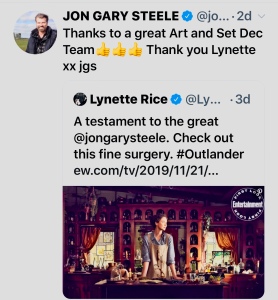 This week Jon and Husband Barry Waldo returned to Los Angeles and were so happy to see the sun. We look forward to new set design and producing ventures of Mr. Steel.

You can keep up with Jon at his very busy Twitter site, @jongarysteel, and his website where he has great break downs of set design and Outlander links. We wish him all the best. He joins his great friend Terry Dresbach, and this last season saw @TheMattRoberts take the lead for show and writer’s room while continuing to produce. Ron D. Moore is still in his seat as showrunner. New producers Sam Heughan and Caitriona Balfe have just stepped up for co-producing in the new season.

Jon Gary Steel’s Website is a bit behind. Hopefully, now that he has more time, there will be more great insights. 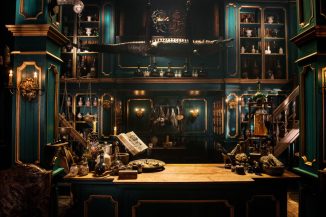 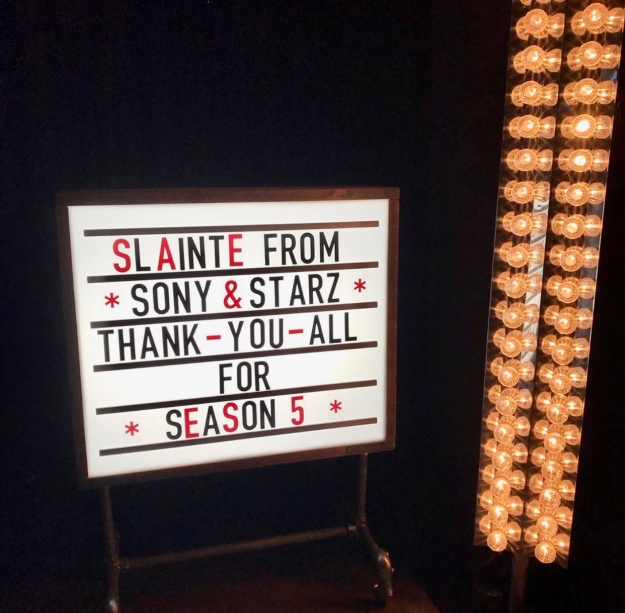 Outlander finished filming series 5 this week. On Saturday, October 16, 2019, a wrap party was held with cast, crew, and production in attendance. It’s done, now the long haul through post-production. February 16, 2019 is closer than you think.